Prince and Velvet Revolver promote new music by giving it away

Two of the biggest rock releases for this month are Prince's Planet Earth, and Velvet Revolver's Libertad. But both Prince and VR have an elaborate plan for boosting album sales; give the music away.

Velvet Revolver, the band featuring former members of Stone Temple Pilots and Guns N Roses, is streaming their new album Libertad for free at Clear Channel Music's website. Libertad won't go on sale until Tuesday. The band is also seeding tracks and videos from the album, as well as concert footage, on Best Buy's site and MSN Video, according to BlabberMouth. 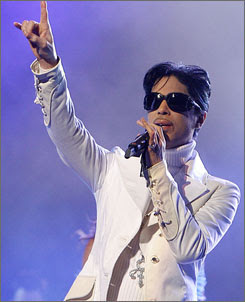 And in response, Sony BMG UK has told Prince that they won't distribute the album in the UK, since he's giving it away. The more things change...

Thanks to CK for the heads-up on Prince.

I have received free albums before (from various promotional sources) and the interesting thing I have found is that I tend to devalue the product a little if I get it for free. I once saw a band give away free EP reselases at a show to anyone that asked for one. By the end of the night there were hundreds of them littering the venue left on tables, some even on the floor..

I heard someone say once "people dont value things that come to them easily" I wonder if this will be the case for these 2 acts..

I remember going to a Stone Temple Pilots/Disturbed concert years ago, and getting of all things a Tara MacLean EP for free from one of the vendors. Never heard of her, but loved the EP and would later find out that her label was Nettwerk, which I've blogged about a time or two here.

I don't tend to devalue good music that I get for free. I do tend to get pissed about paying good money for bad music, tho ;)

Sorry, nudge, but I don't get your thinking here.

I'm sure there have been cases where people have tossed away free CDs, but personally, I have never done so. Every artist that has ever given me a free CD, whether as a mass handout or for me to personally review, I have always listened to it and added it to my extensive library after.

Think about it: you're leaving the show, you're on the way home, what is the FIRST thing that you do when you get in the car? That's right; you turn on the radio or CD player. And what's the first thing you think about then? "Hmm, I guess I can check out this free CD I just got and see if it's any good." And then you have the ride home taken care of, musically speaking.

I don't think that everything of value has to come with a degree of difficulty. In fact, if it's going to be difficult to get, then why would I want to waste my time? Would Mack ever have bought a Tara McLean CD on his own? Probably not. Why risk 20 bucks on someone you've never heard? But now that he's heard her, would he be twice as likely to attend a show or buy her next album? Chances are good.