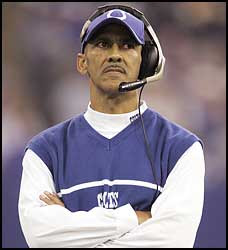 Tony Dungy, the head coach of the Super Bowl Champion Indianapolis Colts, will be blogging this upcoming season.

While I think that's interesting, I think the story of how that agreement came to be is even more so. A few months ago, I discovered Pat Coyle's Sports Marketing 2.0. Pat is the Director of Database Marketing & E-Commerce for the Indianapolis Colts. At Sports Marketing 2.0, he blogs about his efforts to incorporate social media and networking initiatives into the marketing mix for the Colts. In doing so, he gives us an inside glimpse into a major organization that we are rarely afforded from the outside looking in.

But that's the whole point of social media, isn't it? To facilitate communication. His most recent post about how Dungy will be blogging this upcoming season shows that he's working inside the Colts organization to try to bring the franchise and its fans closer together.

"The highlight of my week last week was a meeting with Tony Dungy. It’s always nice to spend time with him, but this meeting was particularly sweet because he agreed to write a blog this season inside our social network.

I have had several meetings with Tony over the past several months, hoping to persuade him to jump in and join us. I’ve been showing him what we’re building and offering him reasons why he might like to blog (i.e. our fans will love it AND it will be a great platform for him to use to communicate with the world). He finally agreed. It’s gonna be great."

He's right, the Colt's fans WILL love it. I'd be willing to bet that Tony will grow to love it as well.

After all, if social media teaches us anything, it's that communication is infectious. Encouraging to see that Pat's efforts to make the Colts more accessible to their fans through social media are having the desired result. Maybe if social media can work for the Super Bowl Champions, it could for your company as well?

Great post...and I'm not even a sports fan. I hope Dungy will not only be giving us a glimpse inside but will also do like Beth Israel's hospital CEO (Paul Levy)and invite student questions.

Ya know, invite questions from the fans and from those who aspire to be coaches. Paul Levy told me these posts encouraging questions have been amongst his most popular. Plus, it's just a way to give back. You know I like that ;-).

Having once been a sports writer for a daily newspaper, here's my take: Great idea, but... As soon as the Colts lose a few, management will step in to stop the blogging. Dungy doesn't get paid to hug fans. He gets paid to win football games. And at the end of the day, only winning puts butts in the seats and keeps TV ratings high.

Heck, the Red Sox (which even tho' I'm in NYC I love 'em) had lost for forever and yet because of the 'community' and what the Sox symbolized they seem to keep seats sold. I'm sure winning boosted those sales but my point is that it's the core fans (the season ticket holders) who seem to be the bread & butter. And I think they would like a hug/communications from the Coach. So long as it doesn't take him from his core job (to Lewis's point).

Lewis I agree that it will be interesting to see what happens the first time the Colts lose a game they shouldn't. Then again, simply saying 'We blew it and it was my fault' could win him more fans.

And that 'fan hugging' can lead to more merchandise sales, so if Dungy is honest with the process, I don't see how it can hurt.

Actually, the Red Sox drew poorly until the '80s, when they started winning, after nearly three decades of shame. Season ticket holders dwindle when teams lose, and empty seats masquerading as fans rule.

I agree with your post and your comment. I'm just not sure management will stay on board if the Colts begin to lose games they are supposed to win.