Theory is good. Theory being put into action and proven is even better. 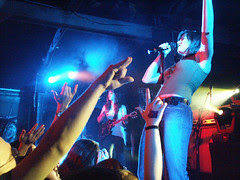 Add Cinematical to the list of blogs that have picked up 'The Miami Vice Story' as I've started calling it when I talk to other bloggers. And the amazing thing is, I spent most of yesterday doing just that, talking to other bloggers about this story. Between contacting bloggers to get them up to speed on what was happening, and fielding comments from bloggers that read my post on Daily Fix, everyone was excited about one rep at one company reaching out to one blogger.

Am I getting a little geeked out by all of this? Yeah....I guess I am.

This excites the hell out of me for 3 reasons:

And yes, the bigger this story gets, the more exciting #3 gets for me.

A couple of months ago after I posted my '100 CDs for 100 Bloggers' idea on Daily Fix, I started hearing from labels that wanted me to explain to them exactly how the promotion would work. It was terribly exciting and frustrating at the same time. Exciting, because the labels I talked realized that there was something to this idea of empowering bloggers to promote their music for them, but frustrating because I got the sense that they didn't want to commit to this promotion because 'no one has done it before'. I remember one guy in particular, he started out with a list of reasons why this couldn't work, but as I explained my idea to him, he realized it would work, and by the end of the conversation he had almost adopted a 'defeated' stance. He knew the idea was great, he knew it would work, but he also knew he could never sell it to his label because, 'no one's ever done anything like this before'.

Now they have. And again, all this hype has originated from ONE post on ONE blog by ONE blogger.

That's it. Multiply that buzz by 100, and what do you get? In the case of '100 CDs for 100 Bloggers', one very happy record label selling a great deal of music for very little cost. Sounds like a win-win to me.

And it works for other products just as well. All you have to do, as Chris said, is 'talk to your advocates'. Find the people in your community that WANT to tell your story, and give them a megaphone. That's it.

The future belongs to the companies that are smart enough to empower their communities to market for them.


PS: Chris now has his Movie Marketing Madness column up for Miami Vice, and he goes into even more detail on the 'word of mouth/mouse' campaign for the movie. All of Chris' MMM columns are must-read, and this is one of his best.

Pic via Flickr user DannyG
Posted by Mack Collier at 8:58 AM

Bravo you tireless marketer! I've left comments over at Movie Marketing Madness today but wanted to repeat what I believe to be the real crowning achievement.

While this certainly underscores the WOM phenom and better marketing practices (by studios) what it really reflects is how much it's advanced the marketing community--becuz we all supported one another.

Mack,
I agree with CK - regardless of whether movie studios and record labels follow your advice and Universal's example, you've done an amazing job of spearheading this campaign to illustrate what a community of bloggers working together can accomplish for each other and on behalf of a company.

Hopefully, one "brave" label or studio at a time will continue to reach out to see the good we can accomplish for them.