Sony has found its foot, but will it pull the trigger? 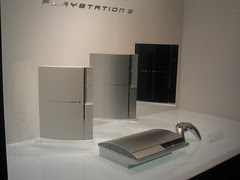 Apparently Gap is having a clearance on 'Bad Idea' jeans, because everyone seems to be strapping them on. The on-again-off-again rumor that the Playstation 3 will NOT play used/pirated games, appears to be back on.

If Sony does employ this technology, that could mean that the copy you buy of a PS3 game would only work on YOUR machine. This move would effectively kill the secondary/used market for these games(which experts estimate as being worth around 900 million.), which would be a blow for retail chains as well as eBay.

And such talk has video gamers, who are already worried over how high the price of PS3 games could go, very concerned. Which is why Sony needs to come out and put these rumors to rest, because their lack of a definite denial is only fanning the flames. At this point their continued refusal to squelch the rumors is eroding the Playstation's brand equity.

The only other alternative is that Sony is actually planning on using this technology, thus their lack of putting the rumors to rest. The brute stupidity behind such a move literally boggles the mind.

Normally it wouldn't be a serious consideration that Sony might actually use this technology, but after the numbskull moves that Coke and Paramount have made recently, you have to wonder.

Holy crap, that's quite a scoop, I hadn't heard about that and i'm quite a gamer. It's an insane thing to do, what would it do to the rental market? I don't think they can possibly do this and survive, there are a hell of a lot of gamers that can't affor the $60 a game their charging now. I for one never buy a game until i've got real world reports that it's a must have. You dont' buy many $50 duds before you learn that lesson about hype.

I've probably bought 50 or so games for both the PS2 and the GameCube over the past year, and of those, only a few were bought first hand. For some of us, the used game market is the only way we can afford to get the titles we want (even if we have to wait a little longer.)

What surprises me is that Sony would even hint about this after all the PR mess they've had lately. People have crapped a gold brick at the $600 price tag for the PS3, especially in comparison to the cheaper XBox 360 and Nintendo Wii (yes, that's Wii as in "whee") so I don't think buyers need any more incentive to go with another system. Thus far, all that the PS3 has really going for it is its all-inclusive reverse compatibility, so that gamers who don't wish to chuck their 50-some-odd PS2 games might choose to go with the PS3.

Unfortunately, many buyers won't do follow-ups like we bloggers do, and they'll remember this article, and even if it's not true, it will keep them from purchasing the unit (should they come into some sort of inheritance and be able to afford it.)

On the good news side is the announcement from NBC that they're finally getting in bed with YouTube. Some may remember that NBC has had legal threats and more against YouTube because so much of what put youTube on the map was old SNL shows copied by and uploaded from their members.

There was a lot of commentary they were making it by stealing.

Now, though, given their success, NBC has teamed up with YouTube and will launch their own channel on the YT site.

That story appeared in ADWEEK online, and the entire link to the adweek piece on NBC and YouTube is: