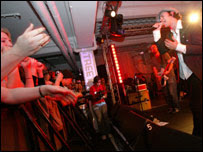 From Church of the Customer comes an interesting promotion by T-Mobile. T-Mobile has started hosting free concerts in the UK for their customers. The concerts are by major brit acts, and in very small venues that will only hold a few hundred fans at most. There is little to no signage or promotion for T-Mobile at the concerts, and the idea is to give their customers a free concert, show them a great time, and hopefully by creating a great experience for them, they'll remember that and not only stick with T-Mobile, but encourage their friends to make the switch to the provider.

I'm not sure how I feel about this promotion, but I wanted to first highlight some quotes from Karen Harrison, a brand manager for T-Mobile in the UK:

"Music has become a little bit too corporate"

"It's not about us ramming T-Mobile down people's throats because there's no need.

"People know who we are."

"People are looking for spontaneity"

"Intimate events work, as long as you are credible and serious about it. There has got to be a reason for you being there.

"You go to a gig and what strikes you is the number of people with a phone in the air taking a picture or ringing a friend or leaving them a voicemail of the show.

"You have to give it context, otherwise it comes across as cynical. We have a role it terms of the network helping people to enjoy music."

Ok, first of all, the above quotes tell me that T-Mobile is realizing that traditional marketing doesn't really reach their target market, and that they need to try some new tactics. As Jackie says on CoC:

It's anti-marketing designed to spur word of mouth. Customers become VIPs at an exclusive event. That should be plenty to get people talking.

It should, but there's one area where I really think T-Mobile missed a golden opportunity here. You give your customers a free concert, you try to create a great time for them so they will tell others about it, so why not make it as easy as possible for them to spread the word? Why not also give these customers that were given the passes to the concert, a free month of text messages and unlimited minutes? That would encourage them to text and talk as much as possible, and I'm sure the fact that they were getting a free concert AND free text/calls would definitely be something they would want to tell their friends about.

The main problem I see with this promotion is that the main focus of the excitement and talk will likely be the band at the concert, and not T-Mobile. And it's a fine-line for T-Mobile to walk, because from the quotes above, you can tell that their thinking was that they wanted the promotion to be very subtle, almost sublime. They realize that pushing T-Mobile in the concert-goers faces smacks of traditional marketing, and would turn their customers off.

But the trade-off is, you risk the band getting the majority of attention and buzz, and not T-Mobile. Let's be honest, if you get a free concert with your favorite artist where you are only 3 feet away from them for 2 hours, that experience will likely impress you more than T-Mobile sponsoring this event.

Having said that, I do think this is a step in the right direction. I think the key is to create a promotion where the customers have a high incentive to spread positive WOM about the product, and are also empowered to communicate that positive WOM to as many people as possible. As I said earlier, I think adding free text messages and calls for at least a month around the time the concert is held, would be a big plus.

Good stuff and yes, there is a VERY fine line between non-traditional, overt marketing...and missing the opportunity altogether.

I think your point about the fine-line companies walk with this type of thing is important to focus on. Look at Andrew's focus on co-branding as an example of how companies are doing this right. To often, though, the co's think that people will remember the concert as "being brought to them by" that company when in reality the audience is just thinking about the concert.

Along with the free text messaging, they probably could have taken a page straight out of the Beastie Boys' book, and had that intimate crowd film the show.

I guess really my point is the same as yours, they may have positively affected the 500 or so folks that actually got to see the show, but they didn't give those people a bullhorn to make it go viral.

Here are some links that I believe will be interested

Keep up the good work. thnx!
»