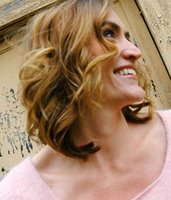 Lotsa people chiming in on both sides of the Nikon D80 Blogger Ambassador program here yesterday. Good stuff everyone. But the other side of the coin might be Heather Armstrong's 'experience' with Nikon.

Every day at her blog Dooce, Heather posts new pictures, and has been for years. She has a disclaimer at the top of her blog stating that she posts pictures everyday, and says that she takes all the pictures with a Nikon D70 she bought a few years ago, which is one notch below the D80 many of us will be receiving shortly. If you've never read Dooce, then please go check it out ASAP, as I've said before, Heather might be the best marketer in the blogosphere, and is definitely one of the best writers.

But last year at SXSW, she had an interesting confession concerning the pictures she posts at Dooce: "I've gotten thousands of emails from people saying that they bought the camera because of those photos... So here I've given Nikon hundreds of thousands of dollars of business, and they've never paid me for it." She later added that Nikon has never contacted her about her postings on Dooce.

My question is, should they? The above statement was made in 2006, so assuming that Dooce's thousands of daily readers are still buying Nikon D70s because of Heather's pictures, it's quite conceivable that her one blog has given Nikon $500,000 to a million in retail sales of the D70.

And Nikon has never contacted Heather about this.

Technorati Tags:
The Viral Garden, Marketing, Nikon
Posted by Mack Collier at 7:55 AM

1) Nikon doesn't owe Heather a penny. She, I assume, was taking and posting the pictures and then writing about them in her own interest, not Nikon's. What Heather did is called word of mouth and brand evangelism. When we start paying people for WOM, then we corrupt the credibility of it as a marketing tool. If Nikon paid Heather, her photos and writings about Nikon would be nothing more than paid advertising.

2) I think Nikon should communicate with Heather and maybe even send her a coupon for a discount on their new camera as part of a customer loyalty program. But the coupons should be for all customers who choose to upgrade, not just Heather.

Not so succinct and maybe a little strong of an opinion, but the words do represent my true feelings.

I assume Nikon even knows about this?

Agreed Lewis, they definitely shouldn't pay Heather, but they should definitely contact her. I'd say a few hundred thousand in retail sales is worth a call/letter from the CEO saying those 2 magic words: "Thank you."

JD in the age of Google Blog Search, we shouldn't have to ask this question. But they very well might not know about Heather using their camera.

It would be a nice gesture for Nikon to contact Heather and thank her. And if they want to offer her a discount on another product, it should be whatever discount they'd offer to other customers or other journalists.

I agree with Lewis. What Heather has done is more "authentic" as I don't think she posted that blurb to get money from them. It would be nice for Nikon to thank her, sure. I assume they don't know about it, actually.

And what we all do on our blogs is authentic as it's what we think and feel sans a freebie. But when we all of a sudden start posting captions of "this shot was taken with XYZ" it's not what we would normally do. Mack does this not make sense to you? It just makes perfect sense to me ;-).

An additional point about autheticity. If you want to look at simply 'you're going to be posting pictures here with a camera that you normally wouldn't', then yes, that will change. But I spend plenty of time blogging about blogger-outreach programs such as this one, and would have even if Nikon hadn't wanted me to be involved.

In this case, I will be directly involved in the program, and can blog about it from the recipient's point of view. I can blog about the good AND bad points of the program at every stage of the program. THAT will be the biggest change on this blog that will result from my involvement, and I feel it will be a great way to give my readers a view of what a program such as this is like from the 'inside.

OK Mack. We agree to disagree. I'll stick to a no freebies rule on my side, except when I need to screen books for the book club (but will always buy the book that we feature and give away my free copy--as I've done to date).

I know you'll be looking at the program from both sides and will be fair as you always are. Thank you for always being so open, it's one of the reasons you're so valued.

Honestly, if the worry here is corruption of WOM, Nikon shouldn't contact her at all. Any sort of interaction other than Heather continuing to use the D70 because it is the best camera in her opinion will break that bond of objectivity between her blog readers and her. Sometimes the answer is just to not get involved and let social interaction take its course.

But, from Nikon's POV, the way to do things would be a showcase ad in a major publication thanking her and showing her pictures as well as the camera that took them. A tag line in the vein of "Pictures worth talking about" might be nice.

"An additional point about autheticity. If you want to look at simply 'you're going to be posting pictures here with a camera that you normally wouldn't', then yes, that will change."

Yes Mack, I want to look at "simply" as most times we find it comes down to a simple yes...or no.

When you posted those pics of BAMA Univ. (as those are truly the only photos I ever remember seeing on this blog) did you include the camera model and type? I can't find the darn post so I don't know.

If it wouldn't naturally occur to you, sans a freebie, then it's simply not authentic. (I'm not saying you ain't the real deal - you simply are).

I would authentically blog about marketing books, practices and professionals. But a camera? Nope. And I argue that I post more darn pics than most (which made me laugh when I thought about the promotion and how they're giving cameras to bloggers that don't necessarily post pics so that it's sooo obvious that Nikon made all the change to their blog - Nikon will love taking credit for "improving blogs").

Tell Nikon to create value for their communities and that will spread WOM. That's what they can be doing. And they need to create customer advisory boards (a practice I've been saying again and again).

jd , CK - Nikon does indeed know about this, and Dooce. Aside from Chris and my own participation in MWW Group's efforts with bloggers on behalf of our clients, the Nikon team is well aware of Heather and her blog and Nikon D70 usage.

As for the other points made on these threads about the current effort going on, all, thanks for your points. Very helpful, and points taken.

I certainly can't see the harm in a simple expression of appreciation, as long as it doesn't take the form of a bribe. Something along these lines:

We've noted that you're using one of our cameras to take some very nice pictures, posted on the web. Great exposures for you happens to be great exposure for us, and we appreciate having you as part of our user family.

I wondered if Nikon had an affiliate program. One of the things they should have thought about before-hand maybe? It's been interesting to watch it develop, though.

A good rule of thumb here might be 'if it smells a bit fishy, don't do it.' You've posted on this three times in three days, which makes me wonder if you're still wrestling with this.

I think there's room for an "Official Nikon Fellow" program (my brother is a Steinway Fellow -- they deliver a piano to him, tuned and fully pimped, wherever he's playing, worldwide -- for bloggers and other influencers who should rightfully feel free to use them, comment on them, and acknowledge their exclusive status. And, Nikon might want to do simple outreach to others who seem to have an interest in photography (like good bloggers with lots of comments and subscribers but who don't post photos). So, a two part outreach program. Might be a viable next phase of their efforts.

"A good rule of thumb here might be 'if it smells a bit fishy, don't do it.' You've posted on this three times in three days, which makes me wonder if you're still wrestling with this."

Good observo by Denny. Or, as Oprah says..."where's there doubt, don't."

"A good rule of thumb here might be 'if it smells a bit fishy, don't do it.' You've posted on this three times in three days, which makes me wonder if you're still wrestling with this."

I'm wrestling with if I am properly explaining what the program involves.

Nikon is letting me use the camera for 6 months. They have said that it is PERFECTLY fine if I *never* blog about the camera, or any pictures I take with it. And unless I plan on buying the camera, I will take them up on their offer, and NOT blog here about the camera or its pictures.

What exactly smells fishy about that?

does nikon knows about her? if yes, they should nurtur such a huge source of business. not necessarily with a salary or money, but involving her in new products development or any other program they have.

Nikon ads over the years have tended to sometimes focus on professional photographers, aligning the brand with the high quality people using the cameras and lenses.

The fact that this is shifting a bit to amateur photographers is a timely recognition of the shift in public awareness toward the talented people using social media to share photos.

The blogger relations program seems more aimed at getting discussion going about the camera than about finding only the top-notch photographers among the blogerati.

I'm not offended that they're getting their product out there, rather than just buying more ad space in a magazine somewhere.