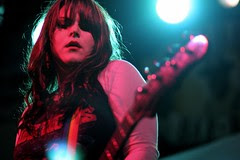 I am constantly getting blog/email questions about my '100 CDs for 100 Bloggers' idea, and I realized that while I did a breakdown of how the promotion would work for Daily Fix, I never posted a full explanation here. Since it's also being talked about on other blogs, I wanted to officially outline what the deal is, and as soon as I figure out how to stop butchering the template for The Garden, I'll post a link on the sidebar here.

I've been blogging/ranting for months on both my blogs wondering why music labels are ignoring a community of bloggers that are music fans who are literally WANTING to promote their artists, but can't because the labels won't let them. I started talking about the idea of giving '100 CDs to 100 bloggers'.

Let's say that The Donnas(or Avril Lavigne, or...) have a new CD coming out on June 27th. So the girls datamine their fan email lists, their forums, etc, and get a list together of 100 fans of their music that also have a blog.

The band emails the 100 bloggers, explains that they will send them a copy of their upcoming CD, if the bloggers will agree to review it on their blog after they hear it. Of course the 100 fans of The Donnas would be thrilled that the band reached out to them to even review the CD, and would be elated that they'd get the CD before it even hit the stores! After getting the addresses together, The Donnas add a BIG bonus, they take an hour or so to sign and inscribe all the CDs.

What's going to happen when 100 fans, thrilled when they see that their free CD from their favorite band has arrived in the mail, open it and ALSO see that it's been personally signed and inscribed to them? My guess is there would be around 100 glowing reviews of the CD and this promotion, within hours throughout the blogosphere.

But as with so many unconventional ideas in business, the potential results need to be quantified before the 'right people' will pay attention. Fine, let me attempt to do that then. Let's assume that of the 100 bloggers that would be contacted, that the average number of readers they get in any day on their blog is 50. So for 100 blogs at 50 readers a day, that would mean that 5,000 readers a day will be exposed to this promotion and the reviews of the new CD by The Donnas.

But the thing to keep in mind is, a blog's readership is loyal, and the blogger has a good deal of influence over them. This isn't like 5,000 random people will be exposed to this promotion per day, but rather 5,000 people that will be heavily influenced to check out The Donnas, because the 100 bloggers are suggesting they do so.

But then we have the ancillary affects. If 100 music fans blog about this promotion, it's only a matter of time before blogs covering news in the music industry catch up to the story, and blog about it. Then you go from 50 or so visitors a day, to 10 even 20 or 30 times that.

And when one industry blog sees it, the other industry blogs will be right behind, and then the snowball is in a freefall downhill. The 5,000 readers that were originally exposed to this promotion could easily balloon to 50,000 or 100,000 readers, with a few of the right links from a few of the right blogs. Per day. And keep in mind that we are still talking about 100 fans of The Donnas. These people have a VESTED interest in leaving their blogs and doing everything they can to help get the word out about their favorite band on other blogs, message boards, everywhere.

And let's be honest, the first label to do something as gutsy as this is going to get MAJOR positive pub in the blogosphere. Which makes such a story bigtime linkbait, which means even more people hear about the promotion, and The Donnas.

So for the cost of 100 CDs, and the time it takes for The Donnas to sign/inscribe 100 CDs, and ship them, the band could have tens if not hundreds of thousands of bloggers be exposed to their music.

Seems like a no-brainer to me, but then again I'm just a dumb blogger. And as most labels will tell you, no one listens to dumb bloggers.

Tell you what: I'll put out my own CD and release it to 100 bloggers for them to review.

I'll be the guinea pig.

Thanks for the offer my man, but this promotion wouldn't be as effective for a new act. It woould work better at expanding an artist's EXISTING fanbase.

It's all about turning existing fans, into empowered marketers for the artist.

I've read several articles online lately lamenting that the bands that are 'internet sensations' never last, because once the hype dies out, they have no established fanbase left to sustain them. That's exactly why this promotion would work, because a fanbase large enough to sustain the artist is already in place. All this promotion can do is GROW that fanbase.

Well you know how I feel about this issue.

And let me add this: Take the recent history of my blog. You have a blog post about Jessica Sierra, Scott Savol, and Lindsey Cardinale: three artists who were made famous by American Idol, but who have to be reintroduced to the population now that they've been off the show for a year. So there's not much being written about them.

Take one incendiary interview posted by one blogger, me. I linked my post on maybe five outside sites. I laid down and took a three hour nap. Within that time, the post went EVERYWHERE. In 3 hours it was on every fan site, discussion forum, and Idol-related blog that I could think of. It got so heated that even the original artist, Jessica Sierra, had to post comments. Within one day, I had 1000 viewers, and another 1000 the next day. Musical Ramblings has NEVER had so much traffic.

Now let's say I blog about, oh, say, Five for Fighting's new CD before it comes out. Then JoeBlow from the ILove54Fighting (made up name) message board stumbles across it while googling for reviews and news on the upcoming disc. He posts about it on ILove54Fighting and all the groupies from there come to the site. Then one of them is a fan over at the IAlsoLuv5forFighting fan board, and they post... and then someone from there posts the link to another music blog....and so on and so forth. Viral marketing at its best, right?

This should be a slam dunk marketing move.

It'll happen. I seem to remember a few years ago, record companies didn't think downloading a song at 99 cents a pop would be a viable option either.

I really dig this blog...the entire idea of viral marketing. Plus the 100 CDs promotion is a scorcher. I'm linking to the Garden in my next post. Congratulations on your article.
This is the first time I've laid down my blog address - mostly because I just started posting to it this month...hope its OK, Mack. I'm curious to see if putting it in one place will draw at least one comment. And I have no idea how to turn it into a link - so copy/paste is the next best thing.

One Reader At A Time

There you go Bob! Thanks a lot!

Caridad said...
This comment has been removed by a blog administrator.
7:39 PM

Hi Mack,
Thanks for sharing your idea with us. I posted about it here.