What I learned from last night's #blogchat 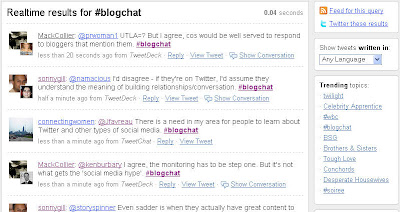 One of the themes I heard last week during SXSWi was that people didn't necessarily want more social tools, they wanted better ways to organize the available information. If you've read this blog for the last few months, you know I was a big fan of the ability of Plurk to allow threaded conversations, and the 'Plurkshops' that resulted. Of course the problem was, as Twitter corrected their instability issues last summer, many people that had tried out Plurk, left the site to return to Twitter. And I was among them. But while Twitter has a much larger community, the format makes it more difficult to organize tweets and track an ongoing conversation.

Yet recently, users have started getting smarter about organizing conversations around hashtags. I believe this was started by @prsarahevans with #journchat and a few others have started. As I've been wrapping up my PPT decks for this week's blogging webinars for Marketing Profs, I've had several blogging questions bouncing around inside my head. Last night I decided to ask Twitter if everyone thought that personal bloggers did a better job of connecting with their readers than company bloggers do. And as an experiment (and way to later track any replies), I added the #blogchat hashtag to my question.

What resulted was a very vibrant and informative conversation for the next 2+ hours about company blogging and how companies can better use blogs to connect with their readers. It was fascinating, and due to the #blogchat hashtag, the conversation was better organized. And it was interesting to watch how the participants helped each other, members such as @conniereece were telling others how to follow the conversation, and how to properly mark their replies.

And yet one of the overarching themes of the conversation, was how companies can create value for their readers, via their blog. I was thinking about this as the conversation unfolded, because at one point I told myself that 'I need to make sure I am following everyone that's participating in this chat'. And I did, I followed about a dozen people during #blogchat, and was actually disappointed to find that I was already following most of the participants. On the flipside, I picked up about 30 new followers in the 2+ hours that #blogchat lasted. I'm sure others were doing the same thing, we were all creating value for each other, and we were cultivating and growing our own personal Twitter networks, as a result.

As I said, last night's #blogchat was purely sponetaneous, I simply added a #blogchat hashtag to a question, and it snowballed from there. At one point last night the #blogchat topic was the 4th most popular on Twitter. You can check out the conversation here. This has also gotten me thinking about how I'd love to see other people hosting similar #chats around other topics. I think we'll see more of this moving forward, and I think that's a good thing.

So thanks to everyone that joined us for last night's first #blogchat! We'll do it again next Sunday night at 8 pm CST.
Posted by Mack Collier at 8:47 AM

Sounds like I missed a great conversation-I've marked my calendar for next Sunday though.

A great resource for following a # discussion like that is tweetchat. You sign into a "room" (basically give the #) and then you come to a twitter type screen where you only see the tweets with that hashtag (even if you don't follow the senders) and any tweet you type in at the top is automatically marked with that hashtag (so you don't forget to!)

I use that frequently at conferences where I am tweeting out notes-I'll leave twitter itself open in another tab to track general conversation as well.

See you next Sun!

You really have good skills and experience of conversation appropriately and this learning with interest shows.

I am very thankful for your blgos. There must be some way of appreciating a blog as a whole, not just a particular post. 25 top ranking blogs gives us clues on where to look for good examples and so on. We shall be visiting this blog often.