Can we figure out what the rules are first before we start breaking them? 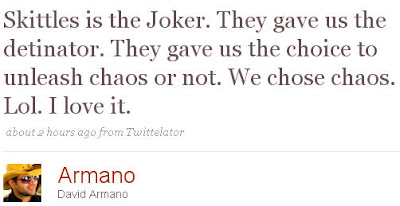 This has been a pretty interesting week to sit back and observe the blogosphere/twittersphere/socialsphere.

First, we had Skittlegate. I blogged about Skittle's new 'social' strategy here Monday. By now, the Skittles' homepage has switched to having its Facebook fan page be the default. MediaPost even claimed originally that this move was prompted by backlash from internet users, but they later acknowledged that the site was simply switched and that the Twitter page was still on the site.

Then we had Forrester issuing a report on what it calls 'Sponsored Conversations'. This also led to backlash in the blogosphere.

As I was mulling over these two stories, I thought about the label of the 'social media expert'. How many posts have been devoted to those three words? How anyone that claims they're a social media expert is a snakeoil salesman, and that no one can claim to be an expert in social media. That the space is too new, and that we are all still learning. And for the most part, I completely agree with that position.

But then there's this...

If no one is a social media expert, how can so many people make definitive judgments on this space? On Monday, a mere handful of hours after news of Skittles' new homepage hit Twitter, I saw several people on there claiming that 'this campaign is a disaster/failure'. After 12 hours?!? We constantly preach about how there are no social media experts and how we want to see companies experiment with social media. Then as soon as a company does, we put on our 'social media expert' cap and claim that the company that just started experimenting with social media, totally blew it.

Then with the 'sponsored conversations' debate it was the same thing. I saw people that accept advertising/sponsorships around their content, claiming that the idea of a sponsored post was wrong. How is one form of monetized content acceptable, and another isn't? Who gets to decide that? And who SHOULD be able to decide that? Again, if there are no 'social media experts', then who is qualified to act as such?

My take is this; this space is still growing, and still evolving. I applaud companies that are taking risks and joining this space right now. Do I think Skittles is doing a great job with their current campaign? No I don't, but I also know that this is a work in progress and that we are only seeing part of the final picture. Do I think that we are making too much of the label 'social media expert'? Yeah I do. It's a label, and I have to think that there's more important things to get upset about than what someone calls themselves (Besides it seems that almost all of the people that others claim are positioning themselves as 'experts' of social media, have never claimed they were). Lisa has a great post on why the 'don't call me a social media expert' stance might be completely wrong.

I think we all need to just chill a bit on accusing others of breaking the rules around social media. Like, until we first determine what those rules are.
Posted by Mack Collier at 8:12 AM

Social media gives us the tools to conduct near instantaneous rants. And while the dialogue is fun, it's not always accurate or even reflective of the majority opinion.

Skittles? Surely they knew a live feed of twitter comments was risky, but they chose the risk. Sweet. I can't wait to see how it plays out, for them and for others who would use it as a case study.

Sponsored posts? I do have a strong opinion on this one. Owing to my journalism background, I think there's a world of difference between content and the ads that surround it. But if I'm not in the majority on this one, that's cool -- won't be the first time or the last.

But maybe we just need to consider whether there's a big enough space between our intial thoughts and our typing fingers.

I agree that it's important to give the space time to develop. I also think the liability of learning, if you will, would be lessened if social media was developed more often under the umbrella of an organization's strategic communications.

There are things we do know about communicating well, and strategic questions we can ask about objectives, audience, and message to be more on target. This allows social media strategies to reflect and enhance larger communications objectives of the company... rather than using social media for social media's sake, which can make a splash but can have unclear or unrelated connections to a company's overall communications efforts.

Mack, in my opinion the campaign was a nice idea with some bugs in the execution. As noted by CK, in an Brandweek interview the VP of integrated marketing communication, stated that they would have removed obscene and negative post. You would agree on obscene but why negative? This is to me a poor execution for a social media project.
Same as for the monitoring service, 'cause after a couple of hours obscene commments WERE online!
Is the campaign a failure? Too early to say and I hope no, because it's a nice experiment. Is it a great execution? Maybe not so good.

How can companies be expected to dip a toe in the Social Media waters when they witness attempts to foster innovation and experimentation into the media pounced upon by the naysayers so quickly. I worry that the hypocrisy and the devils advocate approach may kill the appetite for testing the waters. Lori Miller makes a good point about the space between our initial thoughts and typing fingers.

Really enjoyed the post. And I TOTALLY agree that anyone calling themselves an expert in social media is probably not.

In terms of the Skittles campaign...I think it was interesting to see them show that they are at least mildly comfortable with SM tools. However I agree that the execution was less than stellar so far.

The Good: Way to take a risk. We're still all talking about Skittlegate, right? If they wanted to get a conversation going, mission accomplished. I would never go to their website under normal circumstances, but because of their experiment, I checked it out.

The Bad: Showing your Facebook Fan page, Twitter, etc is fine, but SM is about conversation, and I've yet to see it from Skittles. Maybe its coming, but I feel like so far this move wasn't part of a larger strategy to engage their users and make new ones.

In any case I think we all have the right to blast out our opinions, and it will be interesting to see if those opinions affect their campaign. Only down the road will we be able to judge it a success or failure.

I liked the sense that Skittles were playing with us. I liked that they were putting a bit of fun into their online experience.

For me, this is a great way of activating social media as part of a marketing program. Few brands do this well ... so to claim that this is a failure is very premature. We don't measure success on some list of unwritten rules - success is based on achieving objectives. And I have a feeling that this campaign is well on the way to achieving them (even if WE don't know what they are).

Big company or small, it's all pretty much unchartered waters. That's what makes it so fun, and yet at the same time, attaches so much risk.

Kelli Whidden has an excellent point. Aren't we all really still in the learning process here?

Great comments, thanks to everyone! I think we need to be mindful of how companies view this space. Companies that aren't on Twitter interacting with us everyday. They are considering whether or not social media is right for them, and they are watching what the reaction is to campaigns like Skittles.

I think we all need to remember that every company will make mistakes when they start dabbling in social media. We did, so why do we assume that companies are smarter than we are? ;)

Mack, the irony in all of this is that we complain about the lack of innovation, yet innovation requires risk taking and dare I say it failure. If we have these narrow set of rules, we are hindering the very mission we purport to champion. Do we want a space defined by a small army of self-described experts or do we want to open the platform for broader development?

There are No Social Media Police, at least not yet, although lots of folks are vying for that position.

I applaud Skittles, I think what they are doing is brilliant. Just my opinion. The approach is so, so economical and at the end of the day, Did they sell more candy? If the answer is yes, it worked.

The funny thing is that we complain that social media isn't taken seriously by businesses or brands, and then when they do try something new, it's castigated by thousands of voices.

I'll admit I'm not a fan of the full-on approach Skittles took initially (considering how many people still ask what Twitter is), but I still applauded their initiative in trying it.

Sure, if something is wrong or doesn't work, criticize it. But constructively. Offer suggestions, not barbed wire.

Maybe if some of the so-called big hitters of social media weren't so quick to jump aboard a bandwagon, we'd be in a far better place.

Cheers for some sense and sensibility, Mack.

this is really amazing post,I like it it is simple to read and I think this is helpful to us.