Social Media isn't going away, either get on the bus, or get left behind 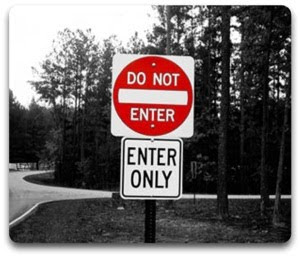 I want to rant, and I want to talk to two people. The first is the guy that thinks that social media is the end-all-be-all of marketing and communication. So much so that it super cedes every and all communication tools that came before it.

The second guy is sick of the first guy. He loves taking swings at him and social media, and focuses his energy on pointing out that social media is NOT the big deal that the first guy thinks it is.

I have a message for both of you: You're getting left behind.

You guys keep fussing about which tools are best, the rest of us will keep figuring out how these tools can WORK TOGETHER to benefit companies.

Where will you spend your time?
Posted by Mack Collier at 11:32 AM

This is so true. To some people think social media is a panacea. And they are disappointed when humans act like humans and their business would be better if all the humans were "doing social media" better and their company would be perfect.

My favorite line of the article:
"It also doesn't belong to companies that think that it's all overblown kool-aid drinking, and that's determined to ignore it, simply because you hate all the hype that social media is getting."

That is so true and "kool-aid drinking" is epic~! Thanks for your thoughts.

The next hurdle will be Who to Trust, there is a lot of Snake Oil to slide through,

I absolutely love this rant! Those who do not embrace social media & work together are those left at the Bus Stop!
For those who's rants against educating social media followers on your your company & what you have to offer, what is Social Media for?

What you make it, no matter what you have to say! You chose to follow, but I agree with Eric on the Snake Oil, beware! It's the quality of your followers not quantity.

If I can make a difference in someones decision of a inferior product or quality, that's my choice.

Most of my DM's questions about branding items aren't even our Clients, but I answer them whether by DM or responding online for all to review.
That's my decision, not yours to tell me not to do so by a rant.

I totally agree with you. Though I have focused most of my studying on Social Media I agree you can't have a strategy which does NOT include traditional. Not everyone is on the band wagon and even if business professionals are trying to teach all of the tools. They haven't enough experience to develop a great strategy.

Creating and understanding how people communicate online is a stepping stone but don't forget the proven methods as well.

I love it. I recently wrote a similar rant about the death spiral propaganda that's flying around everywhere.

One of the reasons I share your strong feelings is that both sides are mostly just yelling at full volume to draw attention to themselves and whichever angle they're pedaling. Declaring "_______ is Dead" is a quick route to sensationalism whether it's true or not.

In the end, this is all about business. Those who adapt win. Those who cling (to the old or the new) lose. It couldn't be simpler.

As someone who grew up in a traditional media world professionally and as a consumer, I recognize its power. As a professional who has gone "digital" over the last five years, I totally embrace the power of social media. I agree with Mack that it is not about one versus the other - it is how to create greater impact leveraging both. I also recommend reading Cory Treffiletti's post in MediaPost last week - The Triumverate: TV, Online, and Social Media - http://www.mediapost.com/publications/?fa=Articles.showArticle&art_aid=111515

Social media is likely to rekindle an interest in integrated marketing. If you can get the strategy behind that right, there is so much benefit to be spread across each and every channel. It's just hard work ;)

Thanks for the rant. The ironic thing is that the two camps really aren't that far apart.

Sure the hype is a bit too much, but the fundamentals of reaching the right audience are virtually the same. Just different media.

I'm right there with ya Mack. We need to stop worrying about the term social media and whether or not it's the second coming, and start worrying about how to apply its principles to our work.

Thanks for the gentle reminder ;)

Somehow I feel (and know) that I'm a lot more in the second camp instead of the first. But I'd like to make it clear that I'm not anti-social media. I'm anti-social media consultant that - as others have already pointed out - are full of many things, including snake oil. All these folks that get so caught up in their online persona and go around and around and around talking to the same people about the same things ad nauseum. It's insane and all they are proving is that they can talk a great game, but that's it.

And for every thousand of those guys, there's one person who actually has hands-on knowledge - but is hardly on twitter, facebook, etc. You know why? Because they are too busy actually doing their job.

So call me a hater, but again - I don't hate the tool. Just the tools.

I could not agree more.

I think people are getting quite excited about Social Media because it is very powerful and is still very young, therefore there are a lot of room for improvement and innovation.

However, just like anything in marketing, social media is only at its most effective when combined with other strategies such as event marketing, search marketing, advertising, Public Relations, etc.

Social Media does not reinvent the wheel, it is only an additional piece that will make businesses run better.

nickrounder said...
This comment has been removed by the author.
10:13 AM

This is why I keep reading you, you are always objective and put things in the right light. There is a common ground that can be reached out there if companies are willing to be open minded and try new avenues, some may not work as well as others but unless you try you will be left in the dust.

Mack, great points here. I think success with social tools begins by figuring out how we can integrate them as opposed to thinking of them as an add-on or a one off solution. Yes, technology has fundamentally shifted the way we communicate, but the social psychology of how humans communicate with each other, has not changed. Don't forget the value that comes with actually having a conversation with someone face to face, in the same room. In my book, it’s not about choosing one over the other; it’s about finding creative ways to embrace the two methods as a whole.