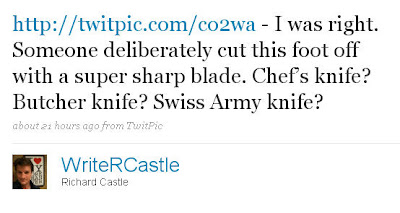 Two years ago, I blogged that popular USA summer series Burn Notice should start using Twitter to build interest in the show. My thinking was that USA could create an account that would let lead character Michael Westin keep followers up to date on his quest to figure out who burned him. If smartly done, USA could give diehard fans a way to learn more about the plot, without penalizing viewers that didn't follow Westin on Twitter.

Burn Notice hasn't yet taken my advice, but it seems ABC has for the show Castle. ABC has created an account for the central character, Richard Castle, and Castle twitters his progress in investigating and solving the murder mystery that's central to the show's plot.

And the move is being used to keep viewers entertained and engaged as the show is currently on its summer hiatus, with the second season starting in September.

This is brilliant, and the first time I've seen a show use Twitter to actually expand on the actual plot and story (guys? Has this been done before? If so, who did it?). I love this, and think leveraging social media in such a way holds enormous potential for television shows. Hopefully we'll see more of this moving forward.

Oh and USA, I'd still love to see Burn Notice using Twitter, email me if you decide to get started.

UPDATE: Lindsay Allen has pointed out that Burn Notice IS on Twitter. That's not bad, but I'd still like to see them doing some in-character tweeting as ABC is with Castle.
Posted by Mack Collier at 1:18 PM

Mark you are absolutely right on with the Twitter/Character thing. First off, I'm a huge Burn Notice fan and would love to have some extra Westin for fun. Second, it's a great way to build a better relationship between the characters and the viewers. And, casual viewers can be updated and reminded about show times and season starts. Love the idea!

Yes it would be great fun to play along with them on Twitter as they fill us in on what's happening. I mean how hard would it be to get a write to churn out 2-3 tweets a day?

I think they tried something like this with Fillion's previous show "Drive" on Fox. But I think it was the actual show writers doing the tweeting. I can't quite recall. Makes no diff, as the show didn't last long.

I mean how hard would it be to get a write to churn out 2-3 tweets a day? wery good.

I think this is a fantastic idea. I've been following the account for awhile now and I find it entertaining. The tweets have a story line as well as just random character tidbits.

Besides the character interacts with the actor who plays him periodically and that's just fantastic.

I wonder if this will become more common as a way for television to interact directly with the audience.