Thin-Slicing the spreading of ideas, and the creation of memes 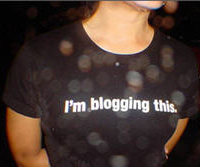 Roger is on a "Thin-slicing" kick. This was inspired by a request from branding-expert Mike Wagner to create his own thin-slicing post. Mike explains that thin-slicing is "a neat cognitive trick that involves taking a narrow slice of data, just what you can capture in the blink of an eye, and letting your intuition do the work for you. It's the ability to find patterns in situations and behavior based on very narrow slices of experience."

Roger has created a 'thin-slicing exercise' for several bloggers, asking them some very interesting questions. Mine was: "How do you "thin-slice" whether an idea has a "meme virus" quality?"

I think this is one of the aspects of blogging that most of us would agree is fascinating; attempting to determine why some posts/ideas seem to take off, while others do not. From my experience, here's some of the factors I believe contribute to an idea being 'meme-worthy'

1. - Keep it simple. The easier an idea is to relate to others, the more likely it will be spread.

2. - The idea provides a clear benefit to others. We want to help others, and we also want to be seen as the person that brings good ideas to others.

3. - The person that benefits the most from the idea being spread is NOT the sender. Remember you're asking someone to take time out of their day, to communicate your idea to others. Unless these people can clearly see how THEY benefit from doing so, they likely won't. Sure your immediate circle of blogging friends might send your idea out there, but when it gets past your buds, will others that come in contact with the idea that have no contact with you, want to spread your idea? That's when an idea turns into a meme, when it gets out in the community and is still being spread.

4. - The idea revolves around a concept that other people are familiar, and interested in. We all have certain topics that naturally interest us, and that we seek out information about. If your idea concerns something that I am passionate about, the odds are very good that I'll make an effort to share your idea with others.

5. - Does your idea contribute to the community? This is a big reason why the 'Z-List' became a meme. Everyone that found and added to the 'Z-List' understood that they were helping others by spreading the idea.

6. - Is your idea really an idea? Can others read your idea and immediately tell why it is significant, and why others should be made aware of it?


Thanks for including me in this Roger, and to everyone else, what are your tips for having an idea turn into a meme? What has worked for you?
Posted by Mack Collier at 12:17 PM

Fun, Mack, I can use this with my own students...

One thing about memes, people act as though there are universal memes, but I think they're specific to pre-established interests.

E.g. the wonderful name: TechMeme.com - for techies and techy wannabes.

So Memes, when and if they take off, will be certain-kinds-of-people specific.

That means a marketer or consultant can stop trying to create a meme that's aimed at everyone, stop trying to be all things to all people, like Yahoo has tried, for example.

That's a good set of criteria, Mack. Thanks for taking time to think about what exactly goes on in your mind in the process.

I have an additional question: how much does it matter who is the author of the original idea?

For example, suppose someone posts an idea that fulfills all the criteria you listed. Isn't it almost axiomatic that if the originator is a "known brand" (with a history in the community) then that idea stands a much greater chance of achieving "memeness" than one posted by a relative unknown?

Or to ask this in another way, how much more difficult is it for an incredibly brilliant idea from a humble origin to become a meme? Or at what point doesn't it matter?

Mack - great to read and think about your take on spreading ideas.

"The person that benefits the most from the idea being spread is NOT the sender."

Good point; especially since I just read a thin-slicing post that doesn't reference me.

I think that is a good thing.

And it builds on something Mike Sansone told me, "you shouldn't have to tag anyone --- at some point people should just want to do it."

That especially makes sense in light of your #3 - The person that benefits the most from the idea being spread is NOT the sender.

Of course, Roger poses a good question - how much does it matter who the author it?

My initial blush is - "not much if the meme benefits others and the community" and "maybe some in getting the first generation of folks to give it a try."

After that, the meme is on its own.

It is always a treat to be part of the conversation with you!

I agree with Mike, if the idea benefits the community, then to me it doesn't really matter who came up with it.

And to be honest, if I had started the 'Z-List' in last March when this blog was still an infant, I doubt it would have gone anywhere. It would have still been a great idea, but I don't think my reach would have been wide enough to get the list exposed to enough bloggers for it to take off.

I suspect we are reversing the order of Gladwell's books.

We've started by talking about a "blink" and a "thin-slice" and now have moved to "the tipping point" question.