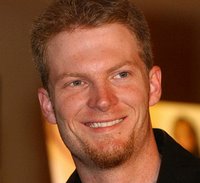 Normally I don't get too excited when a professional sport launches a social-networking site. Mainly because, it's already been done, and we are talking about team sports.

I'm not a huge NASCAR fan, but it seems that Infield Parking has already signed up many of the sport's top drivers with profile pages. Dale Jr., Tony Stewart, Kasey Kahne and Kevin Harvick are some of the drivers represented.

Now as with MySpace, the level of involvement that drivers have with their profile pages varies. Some have had very little to do with their pages, but as expected, president and co-founder Dale Earnhardt Jr. has been pretty active with his page. I noticed that he's already left 5 posts on his blog since starting it 2 weeks ago, and those 5 posts currently have a combined 1,572 comments. The post with the most comments? One he left on Feb. 21st asking his fans to please leave him comments on his page, adding "As time permits, I’m gonna reply to as many as I can, so if you get a note from me, don’t be too surprised." That post currently has 706 comments. I noticed that several of the comments on his page were indeed from people thanking Dale for leaving comments to them.

I think this site is interesting because it's a case of individual athletes using social media to reach fans, as opposed to team sites. So it would seem that the drivers have a much better chance to harness the power of communicating online with their fans, to further expand that fanbase. It would be an interesting case study to see how successful Infield Parking becomes, IF the other drivers become as active with their fans through the site as Earnhardt is.

Hat-Tip to Pat at Sports Marketing 2.0.

No comments here, but I really appreciate the interesting and diverse content you bring to the world.

You are creating, you share new topics and ideas. All good!

Thanks Kevin, the check's in the mail ;)