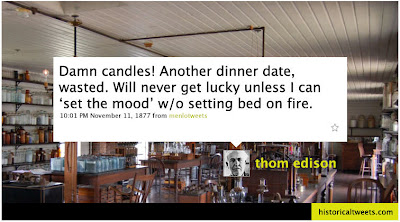 I've always said that one of the best ways to grow your blog's readership, is to have a regular blog series. And an even better idea might be to take your series and give it to your readers.

Have you checked out Historical Tweets? It's a hilarious collection of how famous historical figures would have communicated, if they had been on Twitter. There are SO many ways to have fun with this.


Thank you! Dennis has nailed it, social media is turning into broadcast radio. I know that there are no rules for using social media, but it infuriates me to see so called 'thought leaders' in the social media space using these wonderful communication tools...to broadcast. *shakes fist* (Just for CK)


Shiv fears that we will soon be dealing with 'influencer fatigue'. I disagree, we are instead dealing with lazy companies that aren't targeting the REAL influencers.


SuzeMuse shares what her students taught her about online communities. No social media isn't the only way people connect online, and yes, the students can become the teachers ;)

Thanks again to Steve for letting me take over his fun series for a day. Make sure you subscribe to his StickyFigure blog and follow him on Twitter: Steve Woodruff
Posted by Mack Collier at 5:00 AM

I love the Five in the Morning series and how Steve is opening it for others to share links. Have found some very good resources that way. In fact, I find so much good reading material through posts like this, and of course Twitter, that I rarely even open my feed reader any more.

All this time I thought that title meant he got up and wrote the posts at five in the morning. D'oh! Even God is not up that early!

My concern with Influencers is how little one has to do get that title. To date, most of those who are called Influencers on Twitter or in blog posts aren't business influencers by any stretch of our imagination. So what or who are these folks influencing. I doubt that many in the business world have heard of most folks on these venues who are labeled influencers.

Keep in mind the population talking to itself online is made up of a high percentage of tech folks (the Influencers I refer to are likely known in that world)and social media/social networking evangelists (most who labor in a very small business market).

In business it used to be that an Influencer had to be someone who invented something big, proved themselves to be a great leader or thinker, or was a hugely successful entrepreneur. Today, it seems having lots of Twitter followers gets one on the list. And that will lead to Influencer fatique.

This opinion is brought to The Viral Garden free of charge and might not be worth the price you paid to read it.

Hi Mack - what I great post. I've been lurking for a while - so just wanted to say that I love these ideas and will do at least one this week (and keep going)

Mack-Hi! Thanks for the article. I've been in the advertising industry for about 15 years and have gone back to school to work on my Ph.D. I created a blog as part of a class assignment and am on Twitter etc., but haven't jumped yet (3 posts is more like a skip!) But thanks for your thoughts...I think I'll go take the leap!