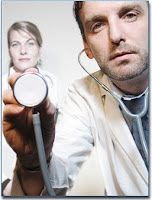 Wal-Mart is probably the poster child for big companies that have tried to enter the social media waters on their terms, and have taken the backlash for it. From their 'Wal-Marting Across America' blog that was outted as being written by their PR firm Edelman, to not allowing comments on previous blogging attempts, the company has a bad reputation among bloggers. But to their credit, that hasn't stopped the company from trying to incorporate blogging into its marketing efforts, and its Checkout blog is its most recent attempt.

And on first blush, Checkout seems to be a much stronger effort than the company's previous blogging attempts. The content leans heavy toward products that Wal-Mart carries, and not the company itself. Which is fine, as it seems that Wal-Mart is positioning Checkout to mainly cover electronics 'gadgets' and also throw in some 'sustainability' posts. Not sure how those two mix, but hey. I did note that on the 'About This Blog' page, they link to Robert Scoble's Corporate Weblog Manifesto, which is a nice touch.

The content is also heavy on DVD new releases. Which is fine, but a post with little more than the movie titles available for sale next Tuesday isn't the greatest community-building tool I've ever seen. And again, the content HAS to be positioned from the reader's point of view, and a listing of upcoming DVD releases is information that can be gained from thousands of sites on the web. And the mix of 'sustainability' and 'earth-friendly' posts are curious on a blog that seems to otherwise focus mostly on new DVD releases. The cynic in me thinks this is simply an effort by Wal-Mart to tap into the 'Go Green!' movement.

Now let's turn the posting schedule. The first thing I notice when arriving at Checkout is that the latest post is from April 22nd, or 9 days ago. Not good. The month of April saw 7 new blog posts, and March had a much more respectable 15 posts. The blog claims to have 9 writers, so only having 7 posts a month from 9 writers means that someone(s) isn't doing their job(s). This would be somewhat forgivable if the writers were active elsewhere, like on Twitter, but I don't think that's the case. I'd like to see a minimum of 3 new posts a week.

Now let's see how the writers handle comments. First, Wal-Mart clearly outlines its comment policy on it's About Page. Good move. The problem I see is that the blog's authors are missing many chances to engage the readers via comments. This is especially obvious issue for recent posts, especially 'green-friendly' posts which are getting good feedback from readers via multiple comments, but little/no response from the writers. Wal-Mart has a golden opportunity to really develop a community around the Checkout blog by actively engaging and responding to readers in the comment section. So far, it looks like they are blowing this chance.

Finally, let's look at the sidebars, and we'll start off with probably the highlight of the entire blog. Look at the section on Check Out The Authors. There's a picture of EVERY author, and a LINK to their BIO. Absolutely fan-damn-tastic! This is EXACTLY what EVERY company blog should have. The only improvement I would suggest would be to move this section a bit higher up the blog, at least partially above the fold.

All the expected elements are here, the categories, archives, recent entries. There's a small 'Subscribe to RSS' section that I think could be bigger. Also, when you're dealing with a corporate blog, I think it's always a good idea to add a little 'What is RSS?' section to explain the concept to readers.

The blog has an excellent blogroll, with a healthy mix of green, tech, and video-game sites. I didn't spot any Wal-Mart sites on the blogroll, which is good. And it even has a Flickr widget. The sidebars are clearly the strong-point for the blog.

Overall, Wal-Mart's Checkout blog is a fair effort. But at the same time, it's a dramatic improvement over the company's previous blogging attempts. I think a more active posting schedule and more interaction with readers via comments could turn this blog into an exceptional example of company blogging.

Also for this entry, I am going to add a scoring system to the Company Blog Checkup series. This will score the blog on four elements: Content, Comments, Posting Schedule, and Sidebars. Content and Comments will be given priority, with up to 35 points for each possible, and Posting Schedule and Sidebars will be given up to 15 points each, with a total perfect score of all four elements resulting in 100 points. Here's how I grade Wal-Mart's Checkout blog:

Content: 26 (out of a possible 35) - Good but not great. I don't think it's necessary to list all of the new DVD releases, just the 2-3 big names, and include a link to the complete list. Also, I think there's a great opportunity for Wal-Mart to publish 'how-to' posts, like 'What to Look For in Choosing a Home Computer', or 'How to Decide Which Television is Best For You'. Maybe they've done these type of posts in the past, but didn't see any recently. The content still has a bit too much of a 'circular' feel to me.

Comments: 14 (out of a possible 35) - Clearly the weak point of the blog, but by simply being more active about responding to comments, this score could easily jump up.

Posting Schedule: 9 (out of a possible 15) - Not quite enough posts. Another easily correctable problem, just get up a regular number of posts every week, and develop a schedule for when these posts will go up. And again, with 9 writers, there's no excuse for only getting up 7 new posts in a month.

Sidebar Elements: 13 (out of a possible 15) - Again, having pictures of every author and a link to their bios is absolutely perfect. While the blog might be lacking in some areas, its sidebars are pretty stout.


If anyone from Wal-Mart wants to discuss this Company Blog Checkup with me, feel free to leave a comment here, or email me. If your company would like to hire me to do an extensive checkup of your blog, you can click here for more information on my blogging and social media consulting services. And if anyone can think of a company blog that they want me to do a checkup on, feel free to email me!

Does your blog need a checkup? Click Here to get yours!
Posted by Mack Collier at 10:31 AM

One of your best traits Mack is offering suggestions along with your critique. In addition to taking a long view, you are adept at noting details. You are good. Its easy to toss bricks at the big organization. I'll be curious to see if any response comes. I want to be a WalMart backer - to see them succeed - but their attention to detail is where they slip. Your post up for 2 weeks now and no conversation? With 9 bloggers on board I'd figure one of them would have noted your invitation.

Mack - One of your strong traits is offering suggestions in addition to critique. You have the ability to take the long view while remaining concentrated on details. Its pretty easy to toss bricks - and be cynical - at a big outfit like WalMart. Extending an invitation to conversation is a touch more difficult. I want to be a WalMart fan if for no other reason than they are so blooming huge. They have power to sway an enormous group of people. But I can't. They are missing that attention to detail. This post has been up for 2 weeks? no comments? With 9 bloggers, you'd expect one to accept the offer to talk i.e use the social media. As you state - somebody isn't doing their job. At the very least somebody doesn't understand it.

Good stuff - very good review. I was so excited when this site first launched, but it has the distinct feel of a lack of community management overseeing the project. I get the sense that it's not being run by a single person able to dedicate some time to making sure things stay on track.

Oh, one point of clarification, however - As I understand the story, Edelmann wasn't writing the Walmarting Across America blog. They'd hired a couple who was friends of someone at the agency, covered their costs, then failed to disclose this fact. The project was great, but they tried to take the easy way out and suffered the consequences. Had it been opening, allowing open auditions and submissions along the way it would have been a fantastic project. Boo for them.