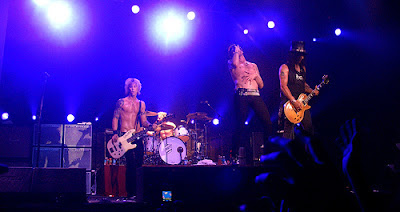 Almost two years ago at BMA, I had a 'brainstorm' post that centered on the idea of music labels finding their blogging fans, and giving them a free copy of their favorite artist's CD. That idea later led to '100 CDs for 100 Bloggers'.

The idea was simple: Take an artist that's about to release a CD, the example I used was The Donnas, and find 100 of their fans that have a blog. Offer to send these blogging fans a copy of the soon-to-be released CD, if they will agree to review the CD on their blog(no I'm not crazy about saying that you have to review the CD in order to get it, but that was added to make the idea more appealing to control-hungry labels). The 'catch' was that the artist, in this case The Donnas, would take an hour or two and personally sign and inscribe every CD to the fan they are sending it to.

My guess was that the average blogging fan of The Donnas was already thrilled to be getting the new CD from the band, but when it arrived and they discovered it was autographed, they would go positively apeshit, and immediately blog not only about the CD, but the promotion itself. My guess was that this would result in a TON of positive exposure in the blogosphere for the CD, right before it releases. The probable impact that would have on sales was pretty easy to guess.

I had a few music labels contact me wanting to discuss how it would work, even had Marc Fisher from The Washington Post reference '100 CDs for 100 Bloggers' on the site:

But in the end, no label I talked to ended up following through on the idea, and I quite frankly got tired of trying to convince them that this idea would work. Hell anyone that understands how ideas travel in the blogosphere could see it was a slam-dunk winner.

Well now it seems there is research to back up the theory that blogging music fans can increase music sales of their favorite artists.

The report, entitled 'Does Chatter Matter?', tracked the sales of 108 CDs and discovered that there was a positive correlation between number of blog posts, and sales. Not earth-shattering, but here's more precise findings.

According to HypeBot, a new CD release that had at least 40 blog posts about it in the month leading up to release, enjoyed sales that were 400% higher than those for the average release.

A new CD release that had 250 or more blog posts about it in the month leading up to its release enjoyed sales that were 600% higher than those for the average release.

The study also found that blog posts about a new release affected sales more than how many 'friends' the artist had on MySpace. The study attempts to explain why blog chatter matters:

Our hypothesis is that blogs and social networks matter independently for the following reasons. First, we believe that a considerable amount of effort goes into writing good blogs, and their authors feel passionate enough about the topic to spend the time writing and sharing them with others. Readers recognize good blogs and pay attention to them. Secondly, while blogs are largely unfiltered, some blog sites tend to have more authority than others. In other words, reputation helps them attract traffic that is in turn influenced by their content.

This is Social Media Marketing 101: Find your evangelists online that are already using social media tools, and empower them to market for you. Maybe a few labels will actually be smart enough to try it out, now that the research backs up the theory.

But I ain't gonna hold my breath.

Does your blog need a checkup? Click Here to get yours!
Posted by Mack Collier at 5:53 PM

great post Mack.... thanks for the links to the study.

i just don't understand why the music industry isn't really looking at this, especially with such slumping sales. i just cannot fathom why they aren't going where their fans are.

Kudos for your efforts man. I've been trying to sell the idea of blogging and social media to musicians for quite some time, and a big part of that is finding the people who are already talking.

This recent study is proof that things like social media are really starting to spill over into other industries that are relying on traditional ad methods to bring home the bacon.

I really don't understand music companies are refusing to trial the 100 DCs for 100 bloggers idea as it is such a charming seeding approach...

Hey Mack -- Interesting... thanks for this and the link to the report "Does Chatter Matter?" -- which, by the way, I love the title of!

"i just don't understand why the music industry isn't really looking at this, especially with such slumping sales. i just cannot fathom why they aren't going where their fans are."

Hammer was on CNBC a few weeks ago and he had a great point. He said that several industries have figured out how to properly monetize music, but that the music industry isn't one of them.

The big labels are scared to death of turning to individual bloggers to promote their artists, because they cannot fathom not only losing marketing control, but giving it to a group that's portrayed in the media as being a group of whiners and complainers. Just too much control and ignorance on the industry's part to realize the incredible gains that could be realized by embracing their blogging fans.

"Kudos for your efforts man. I've been trying to sell the idea of blogging and social media to musicians for quite some time, and a big part of that is finding the people who are already talking."

Yeah there are some drawbacks to this idea, as you actually have to be able to find 100 bloggers that are also a fan of said artist. That becomes difficult unless you are dealing with an established act. But an established act also probably has a control-hungry big label that wants no part of reaching out to bloggers.

"This recent study is proof that things like social media are really starting to spill over into other industries that are relying on traditional ad methods to bring home the bacon.

We should, but we should have two years ago. And I've talked to some incredibly smart people in the industry that are with labels that are smart enough to 'get' the importance of social media, and still they weren't willing to act on an idea like this.

"I really don't understand music companies are refusing to trial the 100 DCs for 100 bloggers idea as it is such a charming seeding approach...

Yep and I think a lot of it goes back to labels not understanding how the blogosphere operates. Anyone that does immediately seems why and idea like this would just take off. It has an obvious grassroots appeal, but as the snowball grows, the larger news and music-oriented sites would pick up on it and the snowball becomes a boulder. It's a winner waiting to happen.

"Hey Mack -- Interesting... thanks for this and the link to the report "Does Chatter Matter?" -- which, by the way, I love the title of!"

The report is very interesting, especially the part about how blog chatter is more influential in purchase decisions than how many friends an artist has on MySpace.

The MySpace part is my favorite part. Not that MySpace isn't a factor - it's important, especially for fostering a community and building a brand - but when it comes to the INFLUENCERS, i.e. the bloggers, you just can't beat 'em. You can spend the time adding friends all day long. Or you can spend the time making bloggers your friend, who will then in turn talk about you to way more people than a random Myspace friend will.

Just trying to get the labels to do anything like this is a feat in itself. Working on indie labels may be a better route, as majors always follow indies when something works.

Just think if each of those blogs had an audience of 1,000 people a week reading it. With only asmall % of those people blogging about it to a new audience.

I know its a no brainer but man it can be huge.

"Working on indie labels may be a better route, as majors always follow indies when something works. "

Here's the problem that I see. I think you need enough blogging fans to write about the CD release, say 100, for it to get significant reach. An established artist probably has 100 blogging fans, but many are scared to death of handing out 100 free CDs.

On the other hand, the indie artists are probably close enough to their fans, and smart enough to go for a promotion like this, but might not have enough blogging fans for it to make a serious impact.