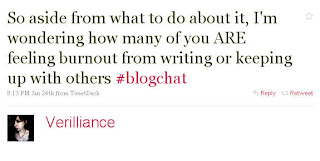 First, if you missed #blogchat, here is the transcript.

Second, if you have no idea what #blogchat is, it's a chat on Twitter that happens every Sunday nite at 8pm Central. We discuss a different topic every week that relates to blogging. EVERYONE is welcome to participate, and here's a good way to keep up with the chat on the web. If you have a Twitter account, you can join by adding the #blogchat hashtag to your tweets.

Our topic this week was dealing with and avoiding blogger burnout. This is something that I've been dealing with from time to time, and from the #blogchat crowd, here are some tips to coping with burnout:

1 - Shift gears and use Twitter more as inspiration for posts - @armano
2 - Set realistic goals and focus on fewer topics on your blog - @mackcollier
3 - Draw inspiration for topics from other blogs and books - @wayneliew
4 - Avoid potential burnout for the reader AND blogger with fewer, higher quality posts - @verilliance
5 - Switch things up and try doing a podcast or video post - @mtlb
6 - Bring in new bloggers or have others do Guest posts - @eric_urbane
7 - Try using an editorial calendar for your blog - @jdebberly
8 - Keep a notebook with you to jot down post ideas - @lorieahuston
9 - Write about topics you are passionate about, not to get traffic - @sarahmaeblogs
10 - Tag posts in Google Reader that can be inspiration for future posts - @tamcdonald
11 - Check out your blog's archives to see if you can find a new take - @amanda_pants
12 - Find connections between two unusual topics - @pcaveney
13 - See what others are talking about, which topics are popular - @eljadaae

Those are some ideas, there are definitely a ton more here in the transcript.

Now, I wanted to talk to you guys about the short-term and long-term future of #blogchat. First, #blogchat is growing like a weed in the Southern summertime. Sunday's #blogchat was our more active yet, with over 1,600 tweets, which I think makes #blogchat the most active chat on Twitter right now. Thanks again to ALL of you that make that possible!

For the next few weeks, the topics and schedule is in a bit of flux. Next Sunday (Jan 31st) is the final Sunday of the month, so it will be Open Mic, meaning there is NO set topic, and everyone can talk about whatever they want. It will be semi-organized chaos and a total blast.

So here's our options for these two weeks, let me know which one is your favorite:

2 - Cancel #blogchat on Super Bowl Sunday, and pick it back up on Valentine's Day


Let me know which option is your favorite! BTW we will have a major co-host on the 21st, and possibly one the week before if we can get the schedule worked out.

Now, another question is the long-term schedule for #blogchat. As I said, #blogchat is really starting to take off. But one complaint I consistently hear about the chat is that a lot of people say they have trouble making #blogchat on Sunday nite. So I wanted to throw this out there; How many of you would like to see #blogchat moved to another nite, and if so, which nite? If we do move #blogchat, my choice would be Thursday, since that nite seems to have fewer chats. But let me know what you guys think.

So please let me know what you guys think for the schedule for next month, and long-term which nite you'd like to see #blogchat from now on. If you're gold with it being on Sunday, let me know that as well.

And finally, thank you guys SO much for making #blogchat the success it has become. This REALLY is due to you guys. If I had used #blogchat as my soapbox and had tried to dominate the conversation each week, I promise you that #blogchat wouldn't be nearly as popular as it is. YOU guys are why #blogchat is so popular, and never forget it! Thank you thank you thank you!


UPDATE: Dell's Chief Blogger Lionel Menchaca has been confirmed as co-host for #blogchat on February 21st ;)
Posted by Mack Collier at 5:16 AM

I appreciate all the work that goes into this, so first of all thank you!

I think Sunday is fine but if you switch it to Thursday or another night I'm fine with that as well.

I'll make time to come no matter what!

I can go with options 3 or 4 . . . and actually prefer 4 as I am away President's Weekend . . . another complication that weekend on top of Valentines Day!. I also prefer Sundays for BlogChat, but am cool with Thursday as well.

I have only been attending for three weeks now, but thoroughly enjoy it. It is very informative with wonderful and thoughtful people involved. Thanks Mack for all your great work!

Thursday night is a smart move as it does appear folks aren't able to make the existing schedule. (I manage SMC Rochester, NY so I'll miss some Thursday blogchats when I'm at our monthly SMC meetups).

Thanks again for #blogchat!! LOVE it! :)

Mack- congrats on building such an informative community around #blogchat! I'm one of those people who can't make Sunday night, and would *love* to see it move to Thursday. So that's my vote, but I do think those who participate each week should have the final say.

Blogchat is a great idea! I have participated only in two sessions and I have already implemented 2 or 3 of the ideas I got from a very energetic and vibrant conversation that goes on on sunday nights.

I think blogchat in the future can become some kind of weekly magazine or maybe even a book can come out of it. I am no expert on web media, but my bet is that the Blogchat reach will be HUGE in the next 6 months.

I think Thursday nights are better than sunday nights for a lot of people. My vote goes for the Thursday option.

regarding the superbowl, i am fine with whichever decision you make, except #1 (Don't lose the momentum!)

Thanks again Mark for hosting the #blogchats! Last week my my first one. I met some great people and got some great ideas from my blogging peers.

I was so happy I wrote a blog about Sundays #blogchat http://www.hallme.com/blog/10-things-to-do-when-you-feel-you-have-nothing-to-blog-about/

I vote for option 4 as well!

I also think Sundays are good. Sunday nights are turning into a prep evening for the start of the work week for me. What better way to prep for the work week with some fresh ideas from other bloggers like me.

Thanks again so much!
Amanda

Thanks guys for your feedback. #4 is probably my favorite as well, so if it continues to remain popular, we'll probably go with that!

I like the idea to move blog chat to Monday for the next couple weeks.

For the permanent time, I'm going to be completely bias here because our #u30pro chat is every thursday and also growing like a weed. It would be great if our chats didn't overlap and we could probably help each other out as a great majority of our participants are interested in blogging.

Sundays work for me too...

Something we realized quickly with u30pro was that we'll never find a time that works for everyone. What we just started doing is expanding our community to our facebook page and a network on brazen careerist. The response to our Brazen network was amazing as many people who can't make the Thursday time regularly now have a chance to participate in the conversation and community. Something you could consider for blogchat as well.

Either way, really glad to be part of the blogchat community and whatever decision you make, I will wholeheartedly support.

I'll vote for Door #4, though for the life of me, I can't see how Valentine's Day = Superbowl.

For a permanent move, I like Wednesday, Tuesday, Friday, Saturday in order of preference, most to least.

I'd also like a separation of chats for "personal" blogs from those for "business" blogs. We have such disparate goals & needs. For me, way too much chatter about products & marketing matters.

Otherwise -- You're all doing very well! (quoting Young Mr. Grayson) Thanks a lot.

Mack, option 4 sounds great. Even us foreigners in this country feel the need to participate in national events like SuperBowl Sunday and Valentine's. As for the day of the week, I like blogchat on Sunday evenings - makes me feel energized and inspired for the week ahead.

I pick number 4, makes sense. I also will do my best to schedule in for this chat session. Always looking for great advice!

Temporary change:
There's a lot of crossover between #blogchat and #journchat (I see a lot of the same faces on both). #journchat is on Monday nights, which might make the change a bit hard for people. Maybe talk to Sarah and do a joint #blogchat & #journchat that night.