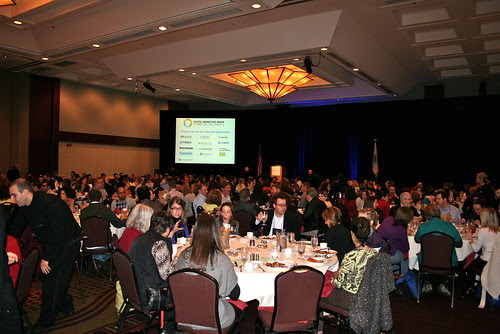 I think if there was a general theme at this year's event for me, it was 'How do we integrate social media into what we are already doing?' And this is a progression from where we were last year, which was still 'What the hell is Twitter/Facebook, anyway?' The problem I see (and this is in general, definitely not just at this event) is that too many companies are focusing on social media tactics (How do I get started on Twitter? How do I create a kickass Facebook fan page?), as opposed to having a solid social media strategy in place. The strategy HAS to come first. You have to FIRST decide what your strategy is for using social media and what you are trying to accomplish, and THEN you can think about which tactics (blog, Twitter, Facebook) will work for your company.

As for the sessions, Day Two was probably better for me than Day One, simply because I got to sit in on more of them. Beth Harte had one of the best quotes of the day when she said 'I've been active in Social Media for 5 years, first as a human, now as a marketer.' I love that! A key takeaway from Beth's Building Online Communities session was (I think by Rachel Happe), that you should closely monitor the content being created by your online community to better determine relevant search keywords, as well as product ideas.

Next was Dr BJ Fogg's keynote on why Facebook and Twitter are winning, and it was amazing. His premise is that Facebook is winning because it has put Hot Triggers in the path of the user. He called a Hot Trigger an action a user can take right now, as opposed to a Cold Trigger, which is basically a call to action that the user can't perform right now. It would be like a billboard asking you to check out the Wall Street Journal (Cold Trigger), versus walking past a newstand where the owner hands you a copy and asks you to check it out (Hot Trigger).

He talked about how it's become a ritual to check Facebook and Twitter. If you're active on those sites, you check them constantly. And he added that the platforms of tomorrow will be based on the behavior that's become ritualized. He also added that anything big, started small, in other words, with fewer features, then drawing on community feedback, additional features and functionality is added and incorporated. But if you start out big, you'll probably have a bunch of features that really don't service the community you want to attract.

Finally, Marketing Profs closed with a session that recapped the key takeaways from the event, giving attendees 30 or so 'key points' to remember and take home with them. THIS right here is why Marketing Profs rocks, because they listen to their attendees. At the B2B forum in June, I was talking with Ann Handley and one other attendee and the attendee mentioned that it would be great if there was some way that Marketing Profs could bring together the 'best tips' from everyone that was taking notes, and share them so everyone had access to them. And what does Marketing Profs do at the Mixer? They named four people 'Mixologists' who went to sessions in each of the four tracks and took copious notes and monitored Twitter for relevant points being raised by attendees. Then at the end of the event, the Mixologists share their notes and points with everyone so that's the last thing they get before going home. Classic example of listening to your customers and implementing changes based on their feedback.

Here's a few of them (I won't share them all, hey that's why need to attend the next MP event!) concerning social media:

1 - Allow your employees to use social media, but govern their usage and give them clear guidelines

2 - Also when crafting those guidelines, have your legal department consult with other companies that have launched successful social media efforts

4 - You have to have a plan for social media. Use Twitter because it FITS into your plan, not because it's the 'hot new thing'

5 - Engage in online communities as a person first, as a marketer second


All-in-all, a very beneficial event for me, as I knew it would be. I left with my mind energized, and I've already got a list of things to improve upon, and yes, blog about! And it was SO amazing to meet so many people that are smarter than I am, that's the real value of these events, being able to connect with these special people. I can share with you all the insights, tips and tricks I learned, but the real value comes from the connections you make. So I hope to see you at the next Marketing Profs event, I know I'll be there!

Mack, Amazing to see you, as always - I finally "get" in a concrete way /why/ you're such a proponent of Marketing Profs' events. So many smart people at one event, doing interesting things - what more could anyone want?

I know it just ended yesterday, but I'm looking forward to the next Marketing Profs' event!

Mack, Excellent summary of the event. Thanks. I was also SO amazing to meet so many people that are smarter than I am - you were one of them. I attended your Hot Seat blogging lab and will applying what I learned to my blog in the weeks to come. - Sean Duffy

Mack - Great overview and what a pleasure to meet you in person. - Mike

Sounds like a great conference. I am always looking for ways to learn how to build a strategy as opposed to learning how to use the tools. I have been using them as a human since 97 with Yahoo Messenger. So I am beyond that part.

An, Sean and Michael, good to see all of you at the Mixer. I was glad I got to meet so many new people there, it helps to hear from new and fresh perspectives, doesn't it?

Jamie, the next MP event is Boston next May, maybe we can meet up there?

I completely agree with the notion that each tool MUST contribute to the company's overall marketing strategy. Not enough Digital Marketing proponents emphasize this. Many just jump on the "next hot thing" as you said. Everyone forgets about ROI and the fact that the marketing budget is an investment just like anything else.

I wish I could have gone to this event.