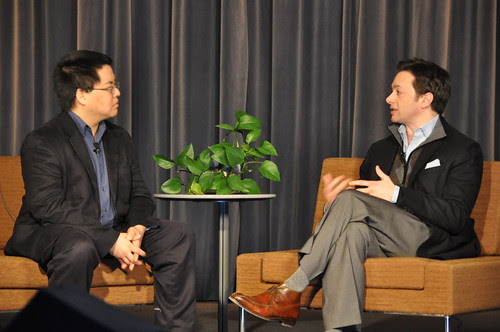 One of the elements of social media that's been really exciting to watch is how large corporations are experimenting with these tools and sites as a way to better connect with and understand their customers. Earlier this year, Citi launched a new credit card program, Citi Forward, that features a strong social media presence. I wanted to talk to Terry O'Neil, Citi Card's Executive Vice President, about how the company is using social media in this campaign, and what their concerns about the space are.

Disclaimer - TMG Brand Communications is the agency of record for Citi Cards, and I worked with them (TMG) on the Citi Forward launch.

MC - Social media plays a big role in the marketing of Citi's Citi Forward Card. Was it a conscious choice to use social media, or did it just make sense to integrate social tools based on the market you are trying to reach?

TO - For Citi Forward, Citi is utilizing social media not only because it’s a great way to reach the target market – consumers looking either to build or maintain healthy credit – but also because it provides us with the opportunity to engage more deeply with our customers and consumers. This dialogue began when we were developing Citi Forward. Citi Forward is the direct result of working with both our existing and prospective customers to better understand their needs and wants relative to a credit card. To further this direct dialogue, we focused our marketing strategy almost entirely on the Internet and social media. And we also entered into a partnership with MySpace to build on those relationships we’re seeking with our cardmembers. Today, they can join the conversation at www.myspace.com/citiforward, on Twitter at @Citi_forward and www.youtube.com/citiforward.


MC - What has Citi learned from using social media to connect with Citi Forward's customers that Citi can carry forward when you use social media in the future?

TO - With this particular campaign we’re reaching consumers almost exclusively via the web and leveraging the power of social media to more deeply engage with our audience. While doing so, we’ve found that our partnership with MySpace and our presence on Twitter has presented us with a terrific opportunity to build upon our brand platform while establishing a two way dialog with our customers. Through social media, we are able to hear consumer’s views on finances and credit cards first hand and translate that valuable feedback into customer driven programs like Citi Forward.

We’re very pleased with the response to Citi Forward so far and the level of engagement we’re seeing from consumers. Over 3,700 socially responsible acts have been completed by MySpace Users through Citi Forward’s 12 Resolutions Program. @Citi_Forward has a growing base of followers on Twitter and has served as an important bridge between consumers and customer service. Citi Forward has quickly responded to cardmember inquiries, with one customer tweeting: “@Citi_Forward rocks!!! Thanks a lot for the efficient service.” Such response has resulted in GoBankingRates.com naming Citi Forward a Top Bank to Follow on Twitter and CreditCardOffersIQ.com highlighting @Citi_Forward as a Tweeter Every Credit Card Hound Should Follow.

Our social media efforts have provided us with an efficient marketing platform and an incredibly effective feedback tool. Looking toward the future, we’ll continue to seek ways to engage more deeply with customers and consumers.

TO - Social media requires a long-term approach and cohesive strategy. It’s about establishing and encouraging conversations with customers in order to strengthen and improve products and services. In doing so, companies need to embrace unfiltered dialog from customers, recognize they’re not going to be able to control the conversations and use this real time feedback to improve the overall customer experience.


Thanks again to Terry for letting us learn more about how Citi is using social media, especially with the Citi Forward card. You can follow @Citi_Forward on Twitter here. And if your company would like to be considered for a future interview in the Social Media Mavens series, please email me. Look for the next interview in this series in two weeks!


Pic of Chris Penn and Terry taken at the webcast for the launch of the Citi Forward card in NYC, and via Christopher S. Penn
Posted by Mack Collier at 10:41 AM

There was no mention of a Facebook page nor can I find one. Is there a reason why Citi would neglect the largest social network?