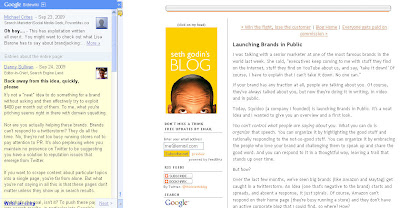 Seth Godin has ruffled feathers for years in the blogosphere by not allowing comments on his blog. He's stated flatly that he appreciates your feedback, but if you want to leave comments, you're going to have to do it somewhere else, besides on his blog. In fact in 2006 he flatly stated that "So, bloggers who like comments, blog on. Commenters, feel free. But not here. Sorry."

Last week, Google launched a browser add-on (For only IE and FireFox, no Chrome, yet) called SideWiki. What SideWiki allows you to do is comment on any webpage, and read comments that other people have written. If you want to comment on the content provided, you can do so. If you want to reference a point made and provide more information, you can do that. The screenshot above is a bit hard to see, but it's Seth's Brands in Public post from last week that caused quite a stir. Seth still doesn't allow comments directly on his blog, but notice that if you use SideWiki, you can read comments that others have left on this post.

If you create online content, your world just changed.

What do you think about SideWiki? Is it a great thing, or is it wrong for bloggers such as Seth to have control taken away from them with something like SideWiki? And remember, just as customers would now have the ability to leave comments on a company's website, couldn't competitors do the same thing? Should they be able to?

A lot to consider and digest, but either way, I would advise taking a look at SideWiki and becoming familiar with what it does, cause it might just be the future.
Posted by Mack Collier at 1:31 PM

It seems to take away the blogger's right to moderate comments. We'll have to see what happens when those who only ever have negative things to say come out.

Interesting.. going to the blog post you commented on, your comment was prefaced with a statement that "These entries may be less useful" (unlike anything I've seen elsewhere in SideWiki).

I've also seen that there are already workarounds to preventing SideWiki from showing up on your site (by blocking all Google Toolbar users. Yes, it's taking a sledgehammer to kill a fly, but it works) - http://www.seroundtable.com/archives/020857.html

I don't see the "These entries may be less useful" notation when I look at it, but maybe that's automatically inserted on comments to older content? That post from Seth that I commented on is over 3 years old.

Seth's is a perfect example of the power that comes from Google's new tool. This power is even stronger if applied to brands. There's only social places now online. No more locks on windows or chains on doors.
I don't know how much a technology like Google SideWiki will spread (we don't have any data yet), but it surely will have the great value of making companies aware that no one can live on an island anymore and that anyone should join the conversation - or get overwhelmed by it.
This is not so obvious for everyone and every markets.

So, no data yet, but SideWiki is surely a wake up call.

Tried to explain it here, too - http://blog.digitalingredients.co.uk/2009/09/engage-your-target-or-lose-control.html

I am so curious to see how this plays out, how they track and stop spam, how people will react and... just about everything. I guess we won't know until it runs its course for a little bit!

I too am curious as to how this plays out. I personally like some control of what I allow people to say on the different blogs I post on. I don't know if I am a fan of this...

customer service professionals-- this is another thing you'll need to monitor-- the cloud just got a little bigger!

Hi Mack,
Wow, This is a pretty cool way to turn the space on it's head. Lot's of questions though, like how do you monitor this, as anyone can leave a comment on ANY of your web pages, and if they don't use your name, you don't really know there is a comment out there without checking each page? Perhaps I am missing something,

It will be pretty fun to watch how this changes the game. For sure, explaining Social Media just got a whole lot more complicated.

Interesting when, as Stefano suggests, this is applied to brands. I'm going to do a few experiments and see what happens!

I think Stefano is right and this may prove to be a boost for companies to monitor the web and to companies like mine for some new business....so, maybe, thanks Google.

This is a game changer in many ways. For companies that kept their heads in the sand about social media, they now have to pay attention since ANYONE can now share views on their brand - right next to their website! Google is bringing more marketing departments into the real world - perhaps kicking and screaming.

Excellent point, Mack. I downloaded SideWiki last week and joked online that I'd probably keep it closed when it came to my blog. But I quickly realized that this could be the space where those who might not comment on a blog post can add their insight in a "bigger picture" way. And I hadn't thought of Seth's blog - brilliant! I have to go over there right now and see what's going on. Then maybe I'll check my blog out as well. :-)

Mack, these tools like SideWiki, get back to enabling the consumer like you said. Also if brands know how to use them, it can in turn help the brand as well. In the past, brands did not have to worry about a mass of people talking bad about their product. In all likelihood, if you or I had a bad experience with a product we would just tell a few family or friends. With social media and all the tools it has brought along with it, that is no longer the issue. Now, everyone will know. Great Blog Mack!

I think Sidewiki is amazing, although I do understand why it scares the pants off some folks. As soon as I read about it, I started using it. A lot of sites are using it to promote their site. And I notice on the Microsoft Sidewiki users are hammering them, mostly about their non-compliant IE browser. I discussed Sidewiki on our HyperArts blog: http://www.hyperarts.com/blog/google-sidewiki-annotating-the-web/