I absolutely obsess over my blog's traffic. Not so much the actual numbers, but I want to know where the traffic is coming from. Can you name the top referring site to your blog? You should be able to.

By watching my traffic like a hawk, I can get a better idea of what content is resonating with my readers, AND where those readers are coming from. Case in point, here is my monthly Sitemeter traffic for 2008: 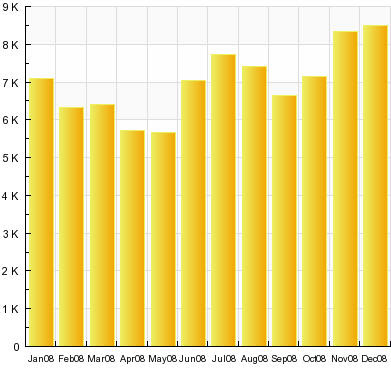 But I wouldn't have noticed that Plurk and Twitter were big sources of traffic for my blog if I hadn't closely examined my traffic referrals via SiteMeter and Google Analytics. After seeing which sites were driving traffic to my blog, that helped me change my usage to make better use of my time. Both SiteMeter and Google Analytics are free, so you really should be using one of them, or another free tool such as StatCounter to track your traffic.

Here's another example of why you should keep a very close eye on your blog's traffic. I closely track my feed subscribers with Feedburner. Now on the surface, the overall number is growing steadily as it has for a couple of years now. That's great. But I started digging deeper into the breakdown of my subscriber numbers, and found that my number of email subscribers (which is counted as part of the total subscriber numbers that FB reports) is surging. For example, I now have 275 email subscribers, and added 48 last month alone. For reference, I only added 9 email subscribers in December of 2007.

Now after studying my blog traffic closely, I know that Twitter is currently the top referring site to this blog. And after studying a breakdown of my feed subscribers, I see that email subscriptions are growing at a quicker rate than people that are subscribing to the blog's feed via a feed reader such as Google Reader or Bloglines.

Are the two related? I think they might be, because my number of Twitter followers has also surged in the past couple of months, and more importantly, many of these new followers appear to be people that have recently joined Twitter. So I am picking up a lot of followers that are new to Twitter, and at the same time I am seeing my email subscriptions surge as well. That suggests to me that many of the new followers I am gaining are also subscribing to this blog's feed, but via email.

One big hint that this is happening came a couple of weeks ago when Tom Martin mentioned me in this article he wrote for Ad Age. He posted the Twitter links to myself and several other social media mavens. I picked up over 100 Twitter followers that day, and I noticed that most of them were only following the few people that Tom mentioned in his Ad Age piece. Many of them also hadn't updated their Twitter account yet. So it was obvious that many had read Tom's article, and decided to join Twitter, and follow the people that he mentioned(thanks again, Tom!).

And here's the clincher. That article went out in Ad Age's newsletter on the 17th, and I added 11 email subscribers that same day, out of 49 for the month.

So from all of this analyzing and obsessing over my blog's traffic and analytics, I can assume that my readership is trending more toward those that are new to social media. This suggests to me that the content I create here some begin to move toward being instructional, and more 'Social Media 101'. Or it could also suggest that launching a newsletter aimed at sharing tips for those new to social media, would be a good idea.

But the bottom-line at the end of this long-winded post is that you should always study your traffic very closely. Studying the raw numbers really isn't that important, understanding that those numbers are REAL PEOPLE, and then understanding what's motivating them to read your blog is what matters.
Posted by Mack Collier at 1:39 PM

Thanks for this post. It was very informative. I'm encouraged to use Google Analytics now.

This shows one of the things I admire most about you. You look at the data and think "how does this enable me to better give"?

I look forward to another year of your wisdom.

Mack,
I think that your advice is pertinent to anything online, from putting up a Facebook fan page to YouTube vidoes to a website - watch your traffic, see what engages your followers and then produce more of that content.
Thanks for the examples and I look forward to reading more of your insights in this new year!

That was a great article but I am such a fan of your blog that I am surprised by how comparatively little traffic you get -- in comparison:

Krissy you should definitely spend some time with Google Analytics, you can also trend how sources are sending you traffic over time, and for keywords, etc. Really a very robust package.

Thanks Will, I really appreciate that. But in the end, if I can take what I have learned and share it with you, that makes the blog more valuable to my readers, so why wouldn't I want to do that?

Eric I am big on understanding what my readers want from me. I know that many people will 'vote with their feet', instead of telling me, so I need to use as many tools as possible to understand what motivates them.

Chris many blogs/sites get far more traffic than mine does. The point of this post definitely wasn't to 'brag' about my traffic, it was to show how certain changes in traffic can be explained if you analyze your traffic and understand what is sending traffic to your blog.

I wasn't accusing you of bragging, I was just saying that I expected your blog, The Viral Garden, to have many more readers since it is AMAZING!

Mack, Happy New Year
Great article. I find much of this somewhat confusing, not knowing what to look for. Perhaps though a regular and consistent analysis is in order, and as with much about Social Media familiarity increases with usage.

Eric if you simply start monitoring your traffic referrals, you can learn a lot about where you should be spending your time. For example, if you spend 1-2 hours a day on Twitter, but you're seeing that you aren't getting any traffic from Twitter, it could indicate that you either need to change how you use Twitter (if you want to drive traffic to your blog), or start spending time elsewhere. I only have so many hours in a day, so I need to maximize all of my time!

Thanks for the sharing, Mack.

I was looking at my data and realized what a spike I get when I use trackbacks with the big bloggers like Seth Godin.

Web crawlers out there are hungry for all perspectives on an issue and trackbacks really work.

This goes back to the sayings "Information is power" & "Knowledge is king" ~ This is true no matter what you are doing and where you are doing it.

The web enables us to easily gather the numbers we need to make informed, conscious,strategic and responsible moves.

We have NO EXCUSE.

Kudos to you for making this necessity seem so simple and accessible....

Take Heed of The Mack people!

Hey Mack - I enjoyed reading your blog on Analytics - here's my challenge. I work for a person whose blog is posted to a server that we don't own - but we got some really big hits on one of our entries and we are trying to find out who referred everyone to our specific blog entry - we would like to say thank you to them. Any thoughts on how to gather that info? Without having to load tracking code on the server?