Give yourself permission to be yourself

One of the things I am always saying companies should do when they use social media, is be themselves. Don't be afraid to post a pic of the company picnic, to talk about the work your employees do for a local charity, or pictures of your best customers. These touches help show your humanity, and make it easier for people to connect with you.

Last night, I took a bit of my own advice. I was on Twitter, and at the same time scanning TV channels to find something good to watch. I noticed that Bill Cosby's Himself standup routine from 1983 was on, which is an absolute classic. I started watching and laughing and sharing some of the funnier lines with my followers, many of which agreed it was a hoot, and started adding in their own favorite parts.

Then @krisrevelle made the mistake of saying that she would love if I tweeted the entire thing. So that's what I started doing, and everyone started jumping in and sharing their favorite spots, and we started helping each other flesh out each skit. 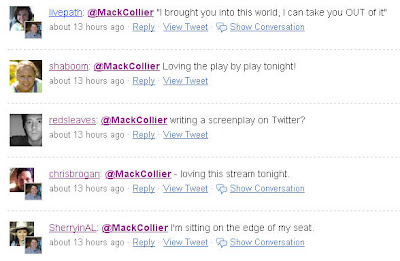 It was hilarious. I was laughing nonstop for an hour or so, and loved sharing the tweets and memories with my followers. And I noticed something as this unfolded; most of the people that were replying to me and playing along, were people that I had rarely or never talked to before on Twitter. Bill Cosby is NOT what I usually am talking about on Twitter. But it seems that I had found a topic that some of my followers could connect with me with, and share. And hopefully that will lead to us connecting on other topics in the future.

So the lesson for companies involved in social media? Don't be afraid to occasionally get off-topic. You might find that you suddenly become a lot more interesting to others, and you may make some new connections and friends.

And if you are a Cos fan, here's one of the skits from that show, Cosby goes to the dentist:

Mack - I follow you on twitter, but have never commented before. I love the point you make about allowing your personality to come through. I think that is an important thing when your readers are trying to relate.Obviously, you made some connections through the commonality of humor, and those who responded may not have tweeted if it were simply a business-y comment you were making. Showing who you are and what makes you tick will attract more interested followers to you. Cheers!

Thanks Virginia! This is why I am BIG on pictures on blogs, because I think they make it much easier for us to connect with someone else. I was talking to someone on Twitter that writes a company blog and mentioned that she was going to do karaoke, and I asked "And this is going on your blog, right?". I think I finally convinced her to add it, but we'll see ;)

Being all-business definitely has it's time and place, but letting a bit of personality slip out every now and then doesn't hurt either.

C'mon, Mack... you know the punchline!

I'm taking this social media stuff slowly. Being new to writing a blog and Twittering,... it's a bit overwhelming, at first. But I've noticed that I consistently look to your blog and tweets for advice about how to BE in this internet world. I just wanted to take a moment and thank you for what you give. This is a great post. I loved reading your tweets as you watched Bill Cosby. Flippin' Hilarious!

I wish I hadn't missed this conversation. I love Cosby -Himself. I think about it every time I ask my son what he wants for breakfast and he says something completely inappropriate. "Chocolate cake! Isn't daddy great!"
Great comedy - no swearing or rude jokes - just life.

You are so 100% right about this. Businesspeople believe it has to be all biz, all the time. Not true. That's not what you're like in real life, and social media should give others a window into that life.

I had an invigorating, unplanned debate today on Twitter about the merits of various kinds of jerky.

I'm still quite wary about putting pictures of myself on my blog, but am starting to use Twitter more. Maybe after reading your posts for a little longer I will gather up more courage! :)

Thanks great Mack. I love the way you weave community into everything you do.

One thing though... had this happened two or three months ago you would have used the word Plurk instead of Twitter. Has you level of activity on Plurk decreased? Mine has... no karma points at all any longer.

Jason everyone was talking about Jerky on Twitter this week! I blame @armano.

Daphne I can understand being hesitant to add a picture, but it really does help.

Paul my usage of Plurk has definitely declined. I used to be on there every day, but as Twitter outages ceased, everyone migrated back to Twitter, so I followed.

I TAKE OFF THE MASK said...

People can connect easier with us when we enable them to see our vulnerable human side. Be authentic :)