Thanks to a mention from Dan Schawbel on Twitter, I was alerted this morning that GE has started blogging, and has joined Twitter. It seems that GE Reports just went live today, and had been writing for the blog for several days previously, so there were plenty of posts waiting on those of us that have found the blog. Even though it is WAY too early to feature the blog in the Company Blog Checkup series, I wanted to give some first impressions, and some advice to GE moving forward.

First, I applaud GE for jumping in the social media waters. That should be said upfront.

Second, the blog is no doubt getting slammed by readers after apparently going 'live' earlier today, then posting that "Starting today, GE Reports is asking for your questions. Do you have a question about GE? Ask us. We’ll do our best to answer them right here on this site." So if they haven't already, I would advise GE to make sure they moderate comments and publish them as soon as possible. And answer as many as you can, as quickly as you can. This will make a big impression on your readers/investors.

Third, I would add a link better explaining what RSS is, and the advantages to your readers of subscribing to your blog's feed. This is a great feature as it lets your investors get news about GE sent directly to them.

Fourth, please clearly identify who is writing this blog, give us a link to their bio, and add their pictures to the blog. Might not seem like it's that important, but it helps put a human face on your company, and it makes it easier for your readers to trust what you write on the blog. And given the nature of the information you'll be sharing, and who you will be sharing it with, trust will be at a severe premium. Adding a pic and bio is a very simple way to increase that trust level. BTW the YouTube videos and channel are a nice touch as well. 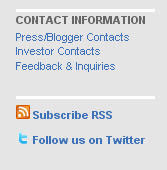 And it isn't lost on me how much times have changed to see a major corporation like GE launch a blog, and have this on the sidebar. In the end, don't worry if you run into some growing pains, because those WILL happen. Just stay with it, be as honest as possible with your readers/investors, appreciate their time, and do everything you can to engage and interact with them. If you make a sincere effort to connect with your blog's readers, they'll pick up on that. BTW if anyone from GE has any questions, feel free to leave a comment here, or if you want, you can email me any questions you might have.

What do you think about this effort? Granted it's VERY early, but what would you advise GE to consider as they move forward with GE Reports?

UPDATE: Megan at GE clarifies in the comments that the blog did NOT go live today, it actually went live at the end of October.
Posted by Mack Collier at 10:09 AM

Thank you for the post and advice! We will work on each one and keep you updated on our progress. Just to clarify the blog did not go live today. It went live in the end of October and we wanted to open it up to hear from our readers, thus the post today.

Any suggestions from your readers would be greatly appreciated!

Mack: not only are all your points very smart, but they are very welcoming to GE. I really appreciate your taking your time (I know you have much going on w/work) to publish these recommendations.

**And I hope other co's will be able to benefit from them as well.

I can't agree more that they need a human face/voice on that blog. I know, it's obvious to us...but they'll find it will really help. Again, very cool of you to turn this around so fast. They should send you chocolate. Or energy-efficient lightbulbs and a handwritten thank you note for your kindness (hey, I had to give GE another action point or then it wouldn't be me :-)

I think the GE execution is very smart -- and they are posting tons of great content from across the company -- from strategic speeches by leadership to fun SNL video at NBC. I see your point about adding a human voice but don't know that its necessary since it's clearly the product of a many voices inside the company. Plus, GE has another blog, From Edison's Desk, at www.grcblog.com with many human voices. This is clearly taking a different approach -- which is taking on inaccuracies in the media and correcting them via blog. Plus, the leadership of the company is buying into it. Yesterday, they essentially broke news out of GE Capital on the site with a video from one of their leaders. Big stuff.

I was just commenting on the value of the physical human voice over at http://theengagingbrand.typepad.com/ - so obviously I definitely agree that GE ought to add a human face and name to their posts at the very least! Just makes for a more interesting read and, as you said, easier to trust. As for anything else to suggest.. just a little more personality in general maybe? I know that it's designed to be very informational - which is great! I would just be interested to hear more of that human tone of voice supporting the names/photos you suggested adding to back up the blog entries.

Congrats to GE for taking the plunge into social networking. Large companies in particular can benefit from the added "voice". People now days expect a company to be more transparent and open to deeper communication.

In this blog we read the concept on GE reports.I will apply on the following steps given by you.this is an impressive blog.