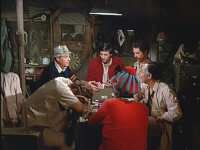 My friends Damien and Amber (with an honorable mention to Shannon) all tagged me in a '7 random things' meme that's going around. Of course these have been floating around for as long as there have been blogs. We all love reading them, and hate writing them, as Geoff Livingston said, 'This sucks.'

But I've been called a good sport, so I'll play along. Besides it doesn't suck nearly as badly as having no one that thinks enough of you to care to hear random things about you, right?

1 - I have never broken a bone in my body, but almost drown once when I was a kid. My family was swimming, and I apparently got caught in a current and sucked under the water. I remember screaming for help, seeing my dad on the shore yelling, while my cousin dove in the water. My cousin got to me first and saved my life.

2 - I am a decent painter and artist. I think it comes from copying Batman comics when I was a kid ;) But I rarely do either anymore, I think I am too much of a perfectionist, and if what I am drawing/painting isn't 'perfect', I'll quickly lose interest.

3 - I am a big-time introvert, and when in groups of people I don't know, or know very well, I will usually stay quiet. Admittedly, connecting with people via social media has made me less so.

4 - I love animals, especially dogs and am getting better about liking cats. I think you can learn a lot about people when you see how they treat animals.

5 - I had never been on an airplane until I flew to Austin for SXSW this year. I've flown five times since then, and love it. Also, SXSW was the first time I had spoke in public in about five years. An introvert making a speaking debut at SXSW. Perhaps not the smartest move, but it worked out ok.

6 - I've been online for about 20 years, and my first computer was a TI-99 4A, which I still have, in the box. I had my first meetup of people I first knew online in I believe 1990, as members of a local BBS got together.

7 - I think the first three seasons of MASH is the best sitcom of all-time, pre-1999 live music from Jewel is amazing, have seen Memento 20 times and still don't know exactly what happened, and will watch A Christmas Story this year several times on TBS like I do every year. So there.


And as I usually do with these memes, I'll forgo linking to anyone else. You can call it an early Christmas present from me ;)
Posted by Mack Collier at 12:40 PM

Enjoying the concept of the 7 Random things, on various blogs, glad you were tagged.

I too am a painter and artist. I studied painting and sculpture, continue to have a studio. Like you if the piece is not “perfect” in my eyes, I lose complete interesting in finishing it. My art teacher used to call a mistake “a happening”, meaning you can take it in another direction. All I saw was a mistake.

I was tagged yesterday, so I will be opening up soon. Thanks for sharing Mack.

BE, I know, surprises everyone that I mention that to. First time flying was worrisome, mainly because looking back, I can see now that I had a bad pilot, ever since I've been fine and love flying.

Tawny I wish I could have taken lessons as a child, my artistic abilities would have probably been much more finely honed now. And I'd probably be far more interested in drawing and painting. But then I would have less time for Twitter, right? ;)

Thanks for the comments, guys!

Glad I found out more about you. I also liked Mash a lot but I prefer Seinfeld. Maybe because I only have 29 years and Seinfeld it's more closer to my taste.

1) I have, now, broken several bones... and also almost drowned. It was my grampa who dived into the pool at the New Orleans Holiday Inn pool who saved me.
2) I hear ya; I write non-blog stuff a lot less than I used to. It was a MAJOR undertaking for me to start the recent poetry stuff, but it was needed. If I send you some Crayons, will start again?
3) It's always the geniuses who are introverts. I'm not an introvert- that should tell you something.
4) Dogs are better than cats. There... I said it.
5) I love to fly, even though it now usually means having my knees under my chin for 14+ hrs at a time. Still, planes are cool. I like helicopters even more though... you should get on one. You'd love it.
6) I didn't get online until about 1997. I didn't even really use a computer until around 1991 and that was for work. I am SO not computer "literate" in many ways.
7) I love MASH too. Jewel was a San Diego singer and we ran in the same circles- most of us were shocked when she "made it". I watch almost NO tv, but I own A Christmas Story. Office Space is one of my favorites too... for so many reasons.